WHAT DOES THE ROOMS TO GO ACQUISITION MEAN FOR THE CASUAL INDUSTRY? 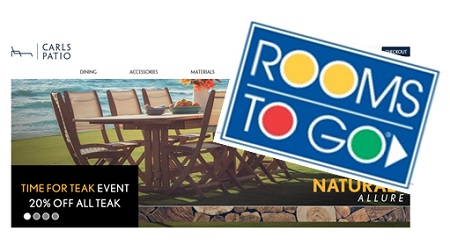 GREENSBORO, N.C. – With Rooms To Go’s acquisition of Florida outdoor retail chain Carls Patio, the casual retail landscape is poised to change dramatically. And some outdoor industry leaders view the purchase as a positive development.

Initially announced last summer when Rooms To Go posted an advertisement in Furniture Today looking to acquire an outdoor retailer, the deal is the latest in a pattern of full-line retailers diving into the outdoor arena.

“It is no surprise that Rooms To Gohas entered the outdoor market, following suit with other large and regional full-line retailers such as Ashley, City, El Dorado, Nebraska Furniture Mart and many others,” says Ashley Newton of Florida-based Leader’s Casual Furniture.

Carls operates 12 stores in Florida, offering a higher-end assortment that includes brands such as Castelle, Lloyd Flanders and Woodard. To some, the Carls/Rooms To Go pairing may seem a strange match considering the latter’s more promotional price points, but according to Castelle’s Derek Ritzel, the combination makes sense.

“I think it will change who (Rooms To Go) is because Carls is a higher-end outdoor player and Rooms To Go is a more value-oriented market,” Ritzel says. “My guess is Rooms To Go wants to play across a broader spectrum.”

For the time being, the stores will still operate under the Carls name. Further, Rooms To Go CEO Jeff Seaman has said that Carls President Paul Otowchits and his team will remain in place. Ritzel says that decision indicates the company’s intention to enter the category carefully and thoughtfully.

“The Seamans are so smart and savvy, and you’ve got Paul Otowchits who grew up in the casual category, so putting those two together, I think you’re going to unleash a really interesting format for this category,” Ritzel says. “I believe the Rooms To Go team looked at the Carls team and said, ‘These guys are subject-matter experts, and they can help us enter the category in the right way.’”

While Carls has the casual industry expertise, Rooms To Go brings a significant logistical network as well as ample resources to grow the business.

“Rooms To Go brings the financial stability and resources to Carls that will allow them to reach their full potential,” says Dudley Flanders, president, Lloyd Flanders. “The Seamans have proven themselves to be masters of furniture retailing, and Paul and his team bring a deep background of the casual market to the table. I believe this combination can only bring more attention and consumer awareness to our segment of the furniture industry.”

Ritzel agrees the acquisition will bring more attention to the category, and he hopes Castelle can continue their partnership with Carls as the business evolves.

What do you think about Rooms To Go’s entry into the casual market? Share your thoughts below, or via email at jbringle@casualliving.com. We will share feedback in a future story online and possibly in the pages of an upcoming issue of Casual Living.