ARE RETAILERS READY FOR A CASHLESS STORE?

May 9, 2018 | Industry Press Highlights, Media, Retail, Advertising and the Economy | 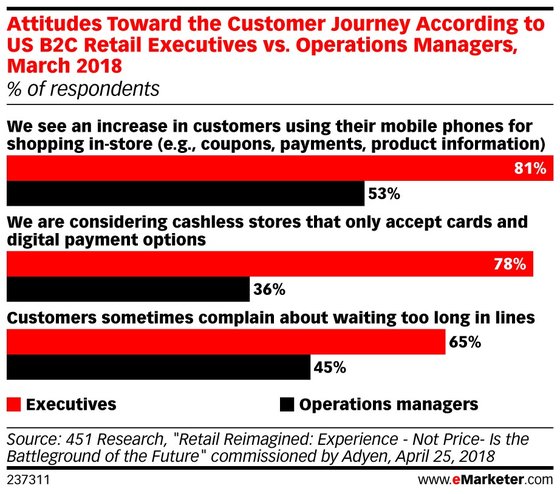 Are cashless stores, like Amazon Go, ready for mass adoption? It depends on who you ask.

According to a March 2018 survey of US B2C retail executives by 451 Research, commissioned by Adyen, 78% of respondents said they’re considering cashless stores that only accept credit cards and other digital payment options. In contrast, 36% of operations managers, essentially those that are more involved with the customer journey day to day, were in agreement.

And their differing views don’t stop there. Retail executives were more likely (81%) to say they saw an increase in customers using their mobile devices while shopping in-store—either for coupons, payments or product information—than operations managers (53%).

In theory, cashless stores may reduce friction at checkout, which is often caused by long lines.

Starbucks, for example, continues its cash-free pilot in its downtown Seattle store, and the company recently expanded the program to select stores in South Korea, where mobile payments are more prevalent. Though cash is accepted by the majority of its footprint, many who frequent Starbucks have grown accustomed to cashless payments and mobile ordering through the coffee chain’s loyalty app.

Mobile payments haven’t hit the mainstream yet, but use is bound to grow as more retailers explore a cash-free approach.

We forecast that the number of proximity mobile payment users in the US will reach 55.0 million this year. By 2019, that number is expected to increase to 61.6 million.