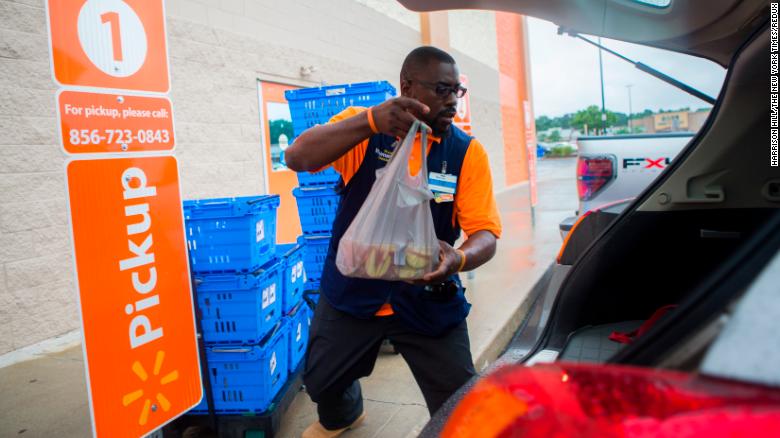 Buy online, pickup-in-store spending increased 47% from November 1 to December 19 compared to a year ago, according to Adobe Analytics.

Offering customers free pickups for digital orders has become a key part of these retailers’ strategy to compete against Amazon’s rapid and extensive home delivery network. Retailers have blanketed the country with store pickup options in recent years, and those investments paid off during the holidays.
Buy online, pickup-in-store spending increased 47% from November 1 to December 19 compared to a year ago, according to data from Adobe Analytics. Adobe said it was the biggest holiday on record for online pickups.
Customers have been quick to embrace online pickups from stores. Analysts say it appeals to shoppers who want to grab their stuff and go without waiting in checkout lines or interacting with sales workers on the floor.
At Walmart’s investor day in October, Chief Customer Officer Janey Whiteside said pickup was attractive to both “a time-pressed mom” heading home after picking her kids up at school and a “convenience-seeking baby boomer on the way home from the golf course.”
Picking up mobile or online orders from stores in hours can also be faster than waiting days for home delivery. It works for last-minute holiday shoppers who need to buy a gift in a hurry. Old Navy even partnered with Lyft to offer customers free rides to stores for online pickups last Saturday.
“The issue with delivery is that it can take several days,” said Georgianna Oliver, the founder of Package Concierge, a firm that creates in-store lockers for retailers. She said weekly orders have doubled for her company’s lockers since last last year.
For retailers, pickup is a better economic model because they can avoid paying expensive shipping fees. Retailers’ profit margins have dipped in recent years from fulfilling online orders.
“The realization of the growing costs of e-commerce fulfillment pushed many brands to step it up this past year,” said Steve Dennis, a retail consultant and former executive at Sears and Neiman Marcus.
Amazon (AMZN), which lags rivals in the space, just started offering grocery pickup from Whole Foods in August. It’s only available in 22 cities. It has also been building out new stores like Amazon Go, Amazon Books, and Amazon-4 Star.
Best Buy (BBY) started offering pickup more than a decade ago. Forty percent of Best Buy’s online orders today are picked up at one of its 1,000 US stores. “Stores are a wonderful asset,”CEO Hubert Joly told CNN Business in a recent interview. “People choose to go to the store because in less than an hour you can pick up your stuff.”
Customers often select pickup from Best Buy instead of home delivery because they’re buying gifts for family members, or they don’t want to risk someone stealing an expensive TV off their porch, Joly said.
Walmart (WMT) offers order online and pickup in store for general items in nearly all of its 4,700 stores in the United States, and the company has recently added grocery pickup to more than 2,000 stores. By the end of the year, it will be able to reach 70% of the US population with grocery pickup, it said.
That means, Walmart will soon overtake Apple as the third largest online retailer in the country thanks to customers picking up groceries in stores, according to report by research firm eMarketer.
Target (TGT) was late to roll out pickup, but has scaled what it calls “drive-up” to around 1,000 stores. Employees bring customers’ orders out to their cars.
Target said that it was helping the company reduce costs. “Given the cost of last mile shipping, we like the economics of drive-up much better,” Target Chief Operating Officer John Mulligan told analysts in November.
Despite the growth opportunities, pickup is not easy to operate and presents several obstacles for retailers, including security, inventory control, and staffing. Retailers have to implement procedures that prevent fraud, Oliver said.
Retailers also need to make sure stores don’t run out of stock for online orders, and that workers are not overwhelmed with double duty handling pickups and running stores. Walmart, for example, has 25,000 trained personal shoppers to select produce and meat at stores for online orders.