May 16, 2019 | Industry Press Highlights, Media, Retail, Advertising and the Economy | 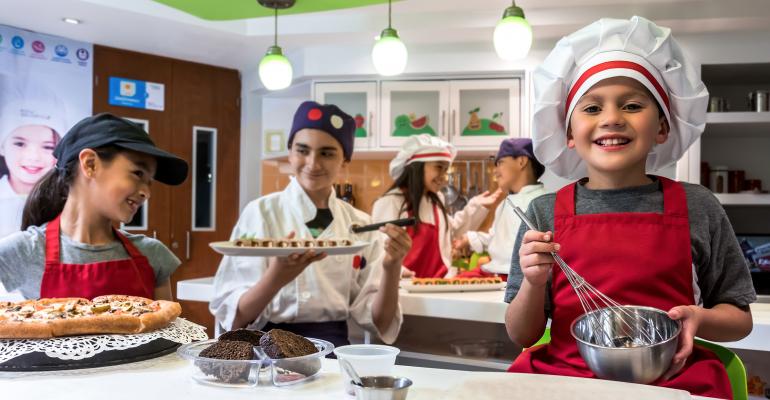 The children’s attraction, which has seen more than 72 million visitors, is looking for 80,000-sq.-ft. spaces.

KidZania, an indoor, interactive mini “city” run by kids that has locations around the world, is about to enter the U.S. market by taking large blocks of space in regional malls.

“Most of the real estate that we’re looking at is [former] multi-level department stores,” and then KidZania will figure out how to repurpose the space, says Gregory Knoop, chief development officer, North America, for KidZania USA.

The question is whether the children’s entertainment concept can help save struggling malls by replacing foot traffic lost by big anchor store closures like J.C. Penney, Sears, Macy’s and Bon-Ton. Retail bankruptcies and store closures have hit malls especially hard, leaving massive vacancies and landlords scrambling to fill them with concepts that can help drive shopper traffic and boost sales.

Many mall operators are shifting their leasing strategies to experiential retail as they look for ways to connect with shoppers and give them something unique that keeps them coming back.

What does KidZania bring to the table?

KidZania operates 27 facilities around the globe, from Mexico City and London to Dubai and Tokyo. The attraction has tallied up more than 72 million visitors since opening its first location in Mexico City in 1999, Knoop says. Company officials say it’s one of the fastest-growing global learning and entertainment brands in the world.

KidZania’s centers typically average 80,000 sq. ft. and offer an environment where children ages 4 to 14 can role play in more than 100 occupations. They can pilot airplanes, act in plays, design robots and perform surgery. The company works with more than 900 companies from the Fortune 5000 list, including Sony, Honda and Coca-Cola, to create its “jobs.” The miniature city even boasts its own currency called “kidZos.”

“What’s critically important for KidZania is the authenticity of the experience for children,” Knoop says.

For example, a decommissioned Boeing 737 airplane—with a child-friendly cockpit flight simulator—gives youngsters the opportunity to see what it would be like to be a pilot. 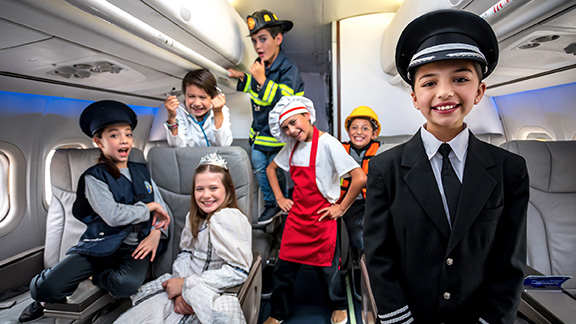 KidZania currently has 10 facilities under development worldwide, including three in the United States. The concept will make its American entrance in the Dallas suburb of Frisco this fall at Stonebriar Centre owned by Brookfield Properties, formerly GGP.

The 80,000-sq.-ft. facility is under construction on a pad site on the mall’s north side and is attached directly to the mall.

The company’s second U.S. location is under construction at Chicago’s Oakbrook Center, another Brookfield/GGP mall, in a former Sears space.

Initially, the three-level, 250,000-sq.-ft. Sears store was downsized to one floor on the lower level. However, only seven months after the smaller, remodeled Sears store reopened, it closed in April as part of Sears Holdings’ bankruptcy proceedings.

KidZania is taking over roughly one-third of the old Sears space, on the upper level and is scheduled to open in 2020.

“We worked with GGP to rip off the roof of the building, raze it and build KidZania underneath,” Knoop says, adding that the attraction always features an illuminated blue-sky ceiling. “That means we need about 32- to 35- foot clear ceiling heights.”

The third U.S. KidZania location will be at the new $5 billion American Dream Meadowlands in East Rutherford, N.J. Triple Five Group is the developer of the approximately 3-million-sq.-ft. entertainment/retail complex, which is scheduled to open this year. KidZania is slated to open in 2020.

There’s also a KidZania planned in Los Angeles, where Knoop says the company is in the process of negotiating a lease, but it’s too early to disclose the location.

More U.S. locations are expected and KidZania is eyeing additional former department store spaces. The rollout plan envisions two models in two phases. Phase one will include the 80,000-sq.-ft. model, in which company executives are planning 14 to 16 locations. Phase two will be smaller, 40,000- to 60,000-sq.-ft. locations.

“There’s an opportunity to do a much higher number of smaller locations,” he says.

“It’s great to see a new concept like that coming into the marketplace,” says national retail consultant/broker Corey Bialow, CEO of Boston-based Bialow Real Estate. “I think it’s really what the malls need in a lot of instances, with all of these department stores that will be coming back. And it’s not just department stores. I think we’re going to see it on the big-box side as well.”

Bialow says mall owners are looking for tenants that “can’t be replicated online and aren’t susceptible to Amazon taking their market share.”

However, there’s always the question of whether any type of experiential tenant will actually translate into mall customers.

“As a landlord, the concern is always: are these necessarily bringing in shoppers?” Bialow notes. Or will people go to a KidZania or other entertainment venue, theater, gym or whatever the “experience” in and then go home?

How much traffic could KidZania generate at U.S. locations?

“We would suggest that the numbers are going to be comparable to our high-performance locations, which are close to, if not greater than, 1 million annual visitors,” Knoop notes. He says KidZaniaTokyo had 1.2 million visitors last year and that location is only 40,000 sq. ft.

KidZania’s direct consumer is between the ages of 4 and 14. “They don’t drive and they don’t have expendable dollars,” Knoop says. “What they have is a guardian, an adult, a person who’s coming with disposable income.”

He adds that during their first visit, parents or guardians will often stay with their children at the KidZania center, but the next time they’re likely to drop them off at the highly secured facility and allow them to explore on their own. Kids typically stay around four hours.

Meanwhile, the adult is likely going to spend those hours at the mall.

“Therefore, the halo effect is proven in the case of KidZania in that we’re bringing disposal income in and without the burden of additional cars and without the distractions of children tagging at the hip side of the disposable income spenders,” he says. “Now that adult can do what they want, and they can fuel the percentage sales, the in-line sales and the traffic throughout the mall. It ends up being a very unique, positive type of economic stimulator and it has been proven. We’ve been doing this for 20 years.” 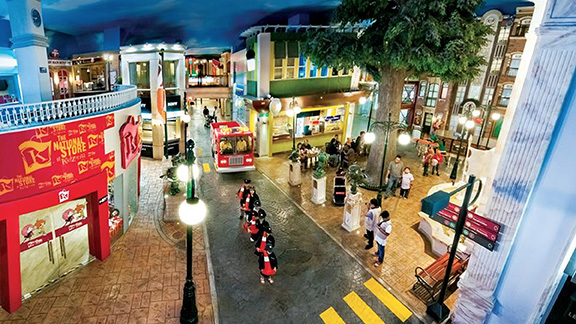 Why the U.S. expansion now?

There were previously some very specific barriers to entry as it related to the U.S., one of which was the cost of real estate, Knoop says. “And that, in today’s softer market and with repurposing of malls has been mitigated,” he adds.

Other barriers have been the high cost of U.S. labor and construction. However, he points out that many landlords are chipping in.

“Landlords have been paying the cost to deliver the warm shell, plus conditions for us,” Knoop says. That means they’re making some contribution to KidZania’s interior improvement costs.

The rationale behind that for landlords, according to Knoop, is the amount of traffic that KidZania is expected to generate.

“We’re getting landlords to offer pretty significant contributions to help offset the leasehold improvement costs for larger tenants,” he says. “It’s a way to incentivize. There are not a lot of larger tenants doing deals out there, and if the investment could be somewhat taken on by the landlord, it really helps from a tenant’s perspective to look at some of these deals.”