DASH OF BROADBAND COULD EMPOWER ATSC 3.0 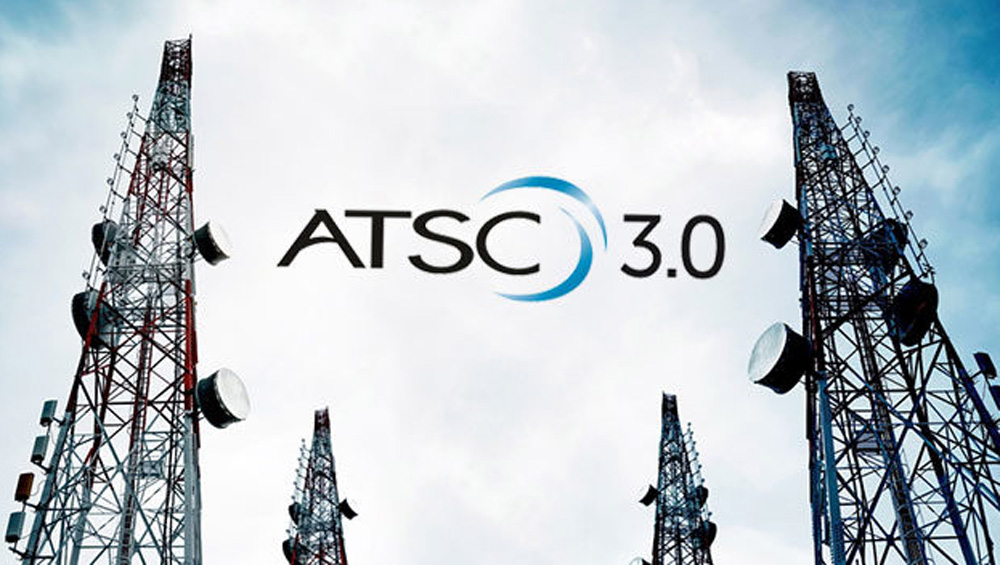 Tech vendors and broadcasters led by Sinclair and Weigel are developing ways to offer high-resolution TV and targeted advertising by layering broadband content on top of the basic ATSC 3.0 over-the-air signals.

Broadcasters and tech vendors are working to tap the full potential of ATSC 3.0, experimenting with ways of combining 3.0 broadcast signals with broadband content to enable a hierarchy of picture resolutions — low for mobile, high for the home — and geographically and demographically targeted advertising.

And in doing so, they are repurposing core technology that already exists and is in everyday use by OTT streaming platforms and cable.

The system uses DASH in both the broadcast and broadband streams, sending a 5 Mbps 1080p HD signal over the air and then delivering a full 15 Mbps 4K signal solely through broadband.

Another hybrid OTA/OTT 3.0 approach favored by many broadcasters is called Scalable HEVC (SHVC), whereby a 4 or 5 Mbps 1080p/60 HD signal would be delivered over the air and a roughly 10 Mbps “enhancement layer” would be sent via the broadband pipe, with the two combined within the ATSC 3.0 set to display 4K.

The SHVC approach uses the MMT (MPEG Media Transport) streaming protocol, which is also included in the 3.0 standard but doesn’t yet enjoy broad support among consumer electronics and mobile devices as does DASH.

When BRCTV13 decided to replace its aging newsroom computer system, managers went looking for a platform that would increase journalists’ productivity while bringing a badly needed technology update to the company’s production platform. They found what they were looking for in Octopus Newsroom.Get the scoop here.

Longtime 3.0 proponent Sinclair Broadcast Group sees merit in both MMT and DASH as it looks to deliver both mobile broadcasts and targeted advertising from its stations, of which 26 are slated to launch 3.0 this year.

But it is also considering taking SHVC technology one step further by delivering both a 480p SD base layer aimed at mobile devices and a 720p HD enhancement layer aimed at TVs within its over-the-air stream.

And based on experimentation by its ONE Media subsidiary, Sinclair thinks it can potentially deliver both streams in a little over 1 Mbps, which would leave the lion’s share of its 3.0 data pipe open for multicasting, non-real-time data delivery of targeted content like cached ads or other new services.

The two layers would be sent as separate PLPs (physical layer pipes) with different modulation/coding schemes giving them different reception characteristics. Higher-resolution formats like 1080p HDR or 4K could be supported through a second or even third enhancement layer delivered via a broadband connection, also using MMT.

Meanwhile, targeted ads or other content that could be “prepositioned” on a data cache within a smart TV or home gateway could be delivered over broadband using ROUTE/DASH (Real-time Object Delivery over Unidirectional Transport/Dynamic Adaptive Streaming over HTTP). Or they could be pushed over-the-air as data files via MMT.

“Our rationale for articulating why MMT is the right distribution model for live linear content is it’s media-fragmentation aware, to be able to provide a robust and resilient playback stream for audiences,” says Jason Justman, senior principal architect at Sinclair Digital.

“Whereas ROUTE/DASH is more optimized for episodic or prepositioned content, where time is not as sensitive as for live linear distribution, with ROUTE/DASH you can recover it over time, but you can’t ever go back and fix what was already displayed to the viewer and clean it up for them.”

Perhaps more important, the combination of MMT and SHVC may help solve one of the thorny problems of the new 3.0 standard: long channel-acquisition times due to the large buffers used in advanced compression, which can range anywhere from 2.5 to over 4 seconds depending on which video segment the tuner picks up when switching channels.

In Harmonic’s hybrid OTA/OTT demo at this year’s NAB Show, for example, the company showed how using broadband in conjunction with OTA could dramatically improve channel-changing times, lowering them to just over a second. 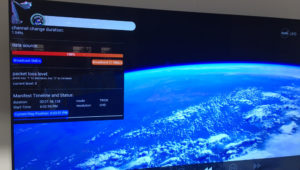 At NAB 2019, Harmonic demonstrated how a hybrid OTA/OTT system could reduce channel change times for 3.0.

The way it worked is that the TV set fetched standard 1080p HD content via broadband before the tuner picked up the next 2-second 1080p HD segment sent over the air. In the demo this reporter saw, without broadband assistance the channel change took between 3.1 and 4.4 seconds; using broadband assistance lowered it to 1.05 to 1.1 seconds.

“Normal HD is available via the server always, if you need it,” says Jean Macher, Harmonic director of broadcast market development. “The client can build in a preference to find the OTA first. Then if there’s a problem, they get it over the top.”

Sinclair is aiming to tackle the 3.0 channel-change problem by providing a base layer over the air that is easier for decoders to digest, with a much lower resolution and frame rate. That base 480p layer would also be sent with robust modulation, allowing it to be easily received by mobile handsets. That was something Sinclair’s early 3.0 field testing indicated would be essential for reliable mobile services.

“This is where SHVC looks quite interesting in some initial evaluations,” says Justman. “In that instead of providing our base and enhancement layer at let’s say, 720p and 4K, what if we went the other way? What if we did a mobile-first base layer, which would be on a separate, more robust PLP, and treated that base player as 480 by 360 with a 15-frame group of pictures [GOP], which is common for MPEG-2 video when it comes to fast-channel change? Now you get a refresh every quarter of a second, you’re allowed to change channels, but more importantly, it’s a robust PLP that can be delivered for mobile devices.”

Sinclair thinks it can deliver the 480p base layer at around 512 kilobits per second, with another 512 kbps required for the additional data in the enhancement layer. That would equate to 720p distribution at around 1 Mbps.

While the mobile device would stick with the 480p stream, a living-room TV would quickly add the enhancement layer to achieve 720p, or perhaps grab another enhancement layer via broadband to render 1080p HDR or even 4K.

Justman notes that is how most OTT services like Amazon or Netflix already work today, starting up quickly with a 480p stream and then stepping up to a higher resolution depending on a customer’s available bandwidth.

“When you first hit the play button it may take one or two seconds to get up to your full 720p or full 1080p or 4K resolution,” Justman says. “It walks you up on your available bandwidth. In this model, it kind of does the exact same thing. It allows you to change the channel, to get at least the next I-frame in the 480p rendition, and as it’s receiving the enhancement layers, to be able to effectively decode that and provide, rather than a hard switchover of the resolution change, an incremental resolution change until it hits the next consolidated I-frame from the enhancement layer.”

Justman initially began working on 3.0 within Sinclair to “solve the ad-tech problem,” and that’s where he says ROUTE/DASH comes in as a way to feed data caches in 3.0 smart TVs and home gateways.

“If ROUTE[/DASH] is excellent for pre-positioned content, then what we have the opportunity for is to pre-position all of our linear orders over the next 24 hours or the next week,” he says. “We know that if we sell out these avails in these markets, here is the equivalent advertising creative and copy that we want to send out.

“So we have the opportunity to provide the live linear programming, and pre-position what we like for those linear insertions, whether it be regional, zonal or contextually relevant content, for those ad insertions. And with the right triggering in ATSC 3.0 and MMT specifically, we can then support a model that would provide client-side digital ad insertion in both a connected and an unconnected device by leveraging pre-positioned content in ROUTE[/DASH].”

The concept is that the “client” would be the data cache in the smart TV. A trigger sent over the air would prompt a targeted ad to be played from that storage and inserted into the live broadcast stream.That differs from “server-side” digital ad insertion, where a TV set’s broadband connection would actually pull an ad from a remote origin server in real time.

Both scenarios could be supported through ROUTE/DASH, although Sinclair is targeting the former because it would work even on an unconnected TV if the relevant data files were pushed over the air in advance.

Sinclair has teamed with ad-software vendor Imagine Communications to figure out how dynamic ad insertion for 3.0 can be supported by existing traffic and automation systems, particularly those based on existing SCTE specifications from the cable industry.

Imagine President Steve Reynolds says the work began with changes to the ad inventory management system to allow broadcasters like Sinclair to segment their audience geographically or demographically, much as cable operators have done for years. 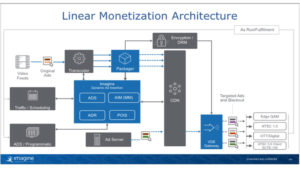 An Imagine schematic of a targeted ad delivery system for ATSC 3.0.

That work is embodied in Imagine’s next-generation traffic platform, the XG Suite. The next step is making sure the 3.0 streams are “properly conditioned” to support targeted delivery, which means leveraging technology already used for dynamic ad insertion in cable.

The first relevant specification is SCTE 104, which comes out of the playout system and directs the placement of triggers into the video stream to mark the ad breaks.

SCTE 104 works in alignment with SCTE 224, which covers metadata for dynamic ad insertion and has been used in video-on-demand and cloud DVR applications. Other relevant specifications include SCTE 35, which is the triggering spec for compressed transport and what would actually get delivered down to the client device, and SCTE 130, a transactional system that defines DAI (dynamic ad insertion).

“There are ad requests, there are ad responses and there’s an interface to a thing called the POIS (placement opportunity information service), which knows where every avail is and what the decisonmaking criteria are for that avail,” Reynolds explains. “And again, those are specs that have probably been around for close to a decade and have been widely deployed by the cable and OTT industries, and now we’re bringing those things to broadcast.”

What is more complex in prepositioning content for 3.0 client-side dynamic ad insertion is that not all consumer receiver devices are going to have the same size or type of cache. In some cases, the broadband channel would then be pressed into service to deliver the targeted spot using DASH.

“You get to a scenario where the ad the client hopes to play is not available, either because it wasn’t cached, or because it wasn’t delivered in the MMT,” says Reynolds. “It’s an ad that’s going to be more efficiently delivered across broadband than it could be across the 3.0 [OTA] channel.

“That starts to get into really deep targeting scenarios, where maybe you’re selling on a demographic basis, and you’re going hyper-local into specific neighborhoods. Then you can actually use that DASH channel to go back across the broadband pipe to an origin server, and request that content using the HTTP. This is the same way that OTT video is delivered — send a request back to the network, and then pull content fragments from an origin server.”