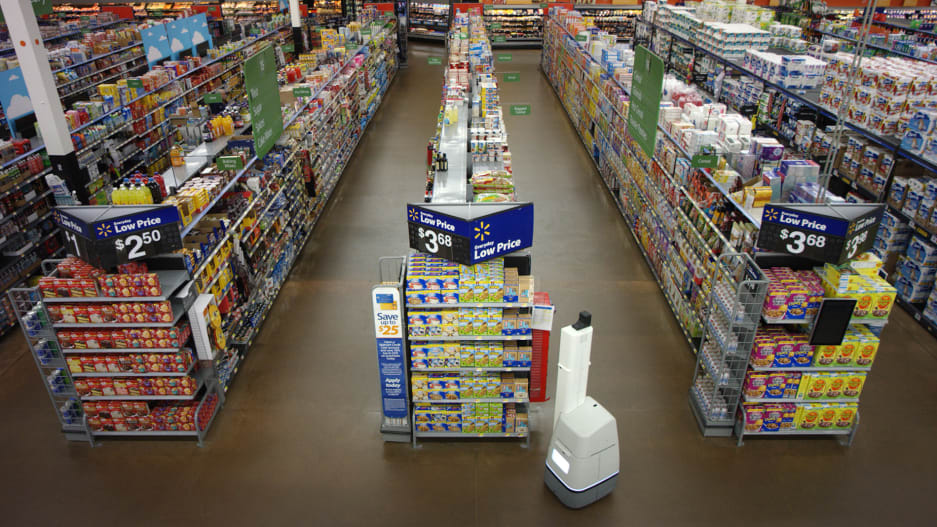 As robots start to move into more public places, like streets and stores, the people who encounter them won’t have any kind of instruction manual on how to engage with them. One of the main places this is happening? The aisles of your local Walmart.

For years, Walmart has been automating its warehouses with robots that can pack and sort items as they zoom along conveyor belts. But the company has also slowly been rolling out robots that roam around store aisles alongside customers, launching in 50 stores in 2017 and rolling out to 350 in 2019. These bots are designed to scan shelves looking for items that are out of stock, eliminating a time-intensive chore that human workers no longer have to do—though workers still have to refill the shelves when the robot finds a missing product.

It’s also turned Walmart into a test bed for robot-human interaction. “What we think is very valuable to us is we have a life-sized laboratory where hopefully millions of people will be seeing our robot,” says Sarjoun Skaff, CTO and cofounder at Bossa Nova, the company behind Walmart’s shelf scanners. “It’s a very valuable lab for researchers to experiment with human-robot interaction concepts. The scale allows you to get to the truth faster.”

One thing that Bossa Nova needed to do was make sure that robots always yielded to people, didn’t get in their way, and could communicate where they were going so people weren’t confused. Some designers have put eyes on robots to indicate direction—humans are used to observing people’s eyes as a way of understanding in which direction they plan to go. But Skaff didn’t want to blatantly anthropomorphize the robot. He wanted it to feel more like a tool than anything else.

To find other ways that the robot could communicate with people, Skaff turned to what he thought would be a convention that everyone would understand: a car’s turn signal. Early in the robot’s development stages, the Bossa Nova team attached makeshift turn signals to the robot’s body and tested it out using a remote control.

“We expected the turn signals to just work,” Skaff says. “It was a big surprise that actually the answer is no. People had a hard time transcribing an experience from the road to one that’s indoors.”

However, it was an apt comparison to make in another way. The last time that humans had to readjust to having machines in their space was when the automobile infiltrated the roads at the turn of the century. And back when cars were first coexisting with humans, their designers hadn’t yet found a common interaction language. There were no turn signals or even brake lights. It’s a remarkable echo of what’s happening now with robots being introduced in public spaces.

Dan Albert, a car historian and author of the new book Are We There Yet?, points out that well into the 1950s, people still put their hands out the window to signal which direction they planned to turn. Other cars were equipped with a little flag called a “trafficator” that popped out from the side of the vehicle to indicate left or right. Brake lights weren’t always what we’re familiar with today, either; even the use of red, yellow, and green in traffic lights wasn’t a foregone conclusion. “All those things are very random,” Albert says. “Every engineer thinks, I’ll do it this way.”

That began to change as states and then the national government realized that people would be safer if there were laws around car design. With regulation came standardization and a safer environment for people—something that robots may require one day as well.

Skaff thinks that’s something Bossa Nova needs to take responsibility for encouraging. “Pioneering companies owe it to society to figure out the right convention for the way robots express intent and indicate presence,” Skaff says. “We should figure out the right way of doing it through experimentation and standardize it so people don’t have to learn how to interpret different robots.”

The standardization of robot interaction design can also learn from the mistakes of urban designers: Our world today was built to accommodate the car, not people (something that cyclists and pedestrians are now paying for with their lives). Albert points to how some robots in factories today have flashing lights or loud beeping noises similar to when trucks back up as a warning for humans to stay away. It’s an example of this older way of thinking: “A flashing yellow light requires human beings to adapt to the robot,” he says, which he views as a failure of the robot’s engineers. Flashing lights aside, a robot shouldn’t be requiring humans to get out of its way to avoid injury—it should be getting out of theirs.

That’s certainly Bossa Nova’s goal: Its shelf scanners don’t get their own special lane in Walmart stores where people know to stay away. Instead, they’re integrated right into the aisle with shoppers—who aren’t always happy with the change. Neither are workers, who, as The Washington Post reports, are beginning to feel like machines themselves, especially given growing fears of how automation will put Americans out of work.

Ultimately, Bossa Nova’s team ditched the idea of turn signals in favor of a rotating ring of light. Skaff says the company is still testing out this ring as an indication of direction—yet another experiment for Walmart’s massive robot test kitchen.