Can a Robot Become the Ultimate Burger ‘Creator?’ 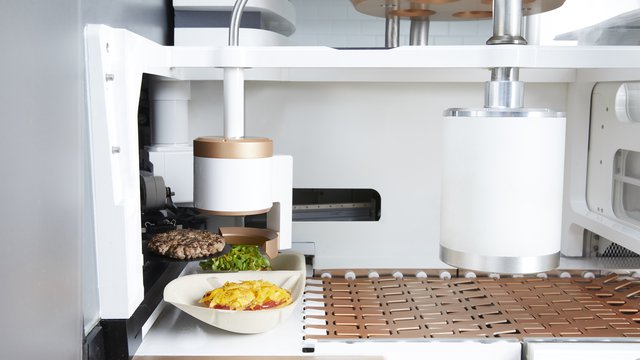 Creator has built a robot to make its burgers from start to finish.
by Cherryh Cansler
Source: www.fastcasual.com, January 2020

San Francisco’s Creator doesn’t need humans to cook its burgers, but that doesn’t mean the restaurant isn’t gourmet. Creator, at 680 Folsom St., is home to the first fast casual restaurant to automate a composed dish — i.e. not a bowl of ingredients —  from start to finish, CEO Alex Vardakostas said in an email interview with FastCasual.

We are talking about an actual burger-making robot, which is different from Flippy, the burger-flipping robot used at the fast casual burger joint, Caliburger.

Creator does the entire job.

Whole brisket and chuck, tomatoes, onions, pickles and cheese are fed whole into the machine, which then grinds, grills and slices to order, said Vardakostas, who boasted that the machine also uses a smashburger technique to release pressure on the patty after the initial smash so as to not squeeze out precious juiciness.

And that’s by design.

Keeping it fresh
Building a robot that can combine a bowl of tossed ingredients is fairly easy, Vardakostas said, but assembling a burger — especially one that is tender and juicy — is more difficult and the reason most upscale restaurants grind their burger patties well in advance.

“We talk about tender steak as a goal, but tender burger patties aren’t really a thing,” Vardakostas said.

At Creator, grind is vertically aligned to your bite, a technique presented by Chef Heston Blumenthal of the famous United Kingdom-based The Fat Duck in his 2007 TV series, “In Search of Perfection.” It’s affectionately known as The Blumenburger.

“Chef Heston Blumenthal traveled the world and tasted the world’s most celebrated burgers,” Vardakostas said. “This is the patty design that he came up with for optimal tenderness and juiciness. I was always in awe of his realization. When we designed our culinary device, we were floored to discover how effortlessly we could execute this technique — so that the guest experiences it at the touch of a button.” 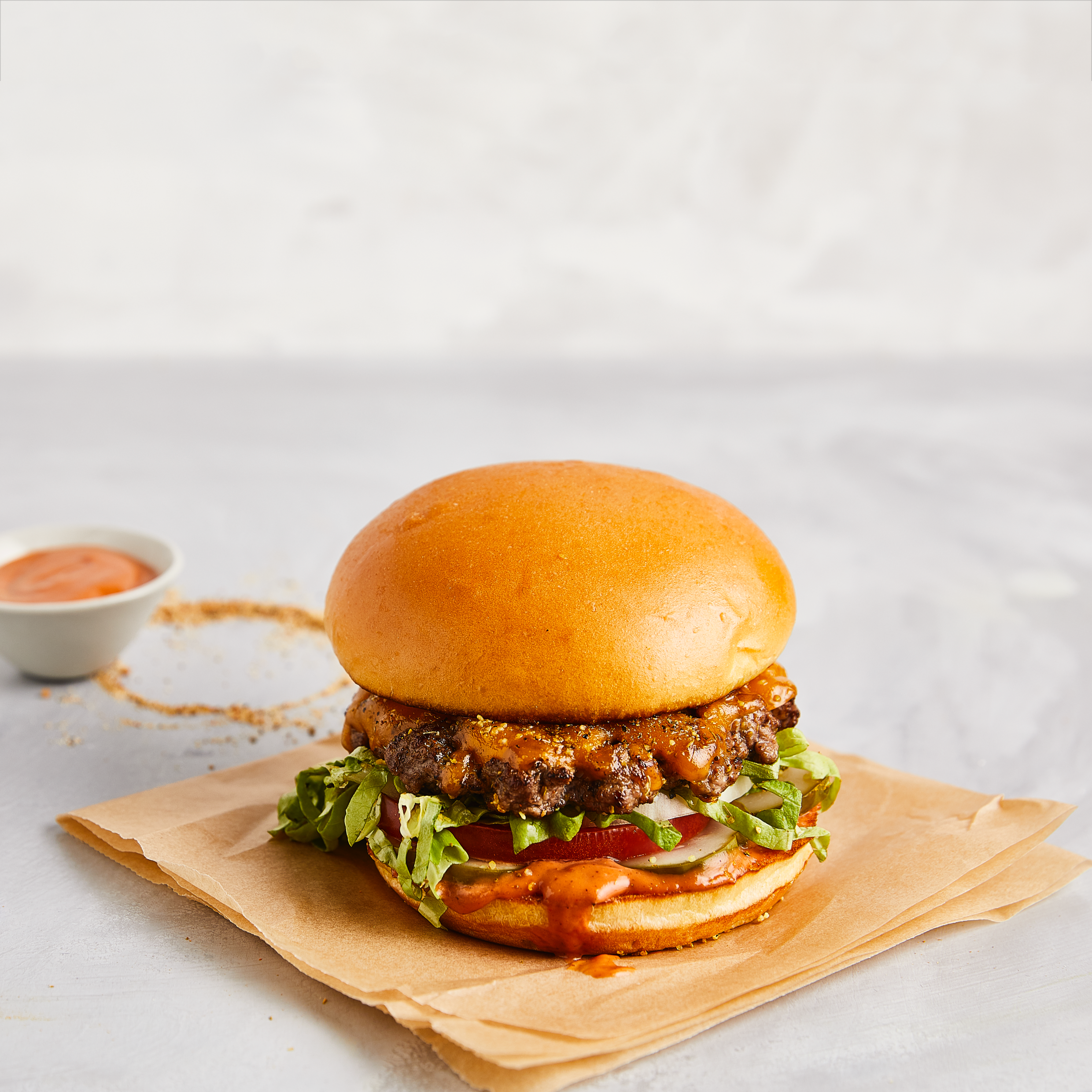 But this was in 2007, and the dream was essentially forgotten, never seriously revisited by the rest of the world — until now.

“By hand, it is practically impossible to keep the grind vertical from grinding to griddle, Vardakostas said. “Especially if you’re trying to keep the patty so delicately and loosely packed it would fall apart in human hands. Fortunately, our device has the dexterity to handle all this.”

He said it’s easy for other burger patties’ grind strands to get twisted, resulting in an less-than-tender patty.

“Plus, most patties get compacted and compressed; it’s inevitable when chefs in a busy restaurant need to be able to pick one up to throw it down on the griddle quickly,” he said.

How about the costs?
Although Vardakostas said he couldn’t reveal the costs to build or maintain the machine, he said his robot was worth the investment as it can offer pastured, responsibly produced family cooperative beef for $6.That allows him to offer “luxury” ingredients and sophisticated flavor pairings — a more intellectualized ordering experience —  at roughly a $6 price point.

Creator, which hopes to open more units over the next few years, also increases access to culinary techniques that are beyond even high-end restaurants.

“These techniques are dreamed up by chefs of Michelin-starred restaurants, but next to impossible by hand,” he said. “In fact, these techniques made a splash for their impracticality in a by-hand operation when first published 10 years ago as a theory for making burger patties as tender and as juicy as possible. No restaurant to our knowledge has attempted to serve burgers made this way.”

And since Creator uses a hybrid smashburger technique, it offers the best of both worlds, Vardakostas said. The griddle presses down on the patty just enough to create more surface area for a “Maillard reaction,” a chemical reaction between amino acids and reducing sugars that gives browned food its distinctive flavor.

“Yet, (it) eases off the pressure after the right amount of time to maintain the loosely packed texture and keep from squeezing out precious juices,” he said.

What about human interaction?
Contrary to what one might believe, Vardakostas said Creator offers better jobs as well as a social, human-interaction-rich service experience at a time when restaurateurs are increasingly forced to put front of house by the wayside.

“These jobs are creative, social, problem-solving and multidisciplinary,” he said. “Plus, we are able to provide unparalleled indoor air quality for workers. Instead of griddles giving off grease-laden vapors, our device contains them in a filtered airstream. Many people comment on how clean the air smells in the restaurant.”

So, it’s sustainable?
Creator offers incredible efficiency through its automation technology, said Chief Retail Officer Hans Hess. He recently joined the team after founding Elevation Burger, a fast casual brand known for its sustainability efforts, in 2005 and growing it to 60 units before leaving day-to-day operations in 2014. “This allows us to transparently scale up the sustainable, ethically sourced, high-quality food that consumers increasingly demand.”

And that’s not easy to scale if using premium ingredients, according to Hess, who said Creator is doing just that  — making burgers with costly ingredients accessible to a large audience.

“At Creator, food automation is designed as a human-centric and carbon-neutral dining experience backed by some of the best culinary minds in the country, not just a novelty, so our guests keep coming back,” he said. “Customer feedback metrics are literally the highest in the industry in the very first year our flagship restaurant has been in operation.”

Vardakostas, who said the company’s culinary devices produce double the volume of a typical burger restaurant, is confident that Hess’ strategic knowledge of the industry can only help the company produce burgers at an accelerated rate in far less square footage than traditional foodservice settings.

“Hans’ achievements in improving our food system speak for themselves,” Vardakostas said. “Most importantly, Hans had a vision of doing the right thing before it was cool, and he actually defined a course for it.

“I’ve been fortunate to have his mentorship for six years. Hans agreed to join us, and grow Creator as both a restaurant company as well as an automation company. With Hans, we continue building our curated team exceptionally talented in their craft.”

All photos provided by Creator.

Before joining Networld Media Group as director of Editorial, where she oversees Networld Media Group’s nine B2B publications, Cherryh Cansler served as Content Specialist at Barkley ad agency in Kansas City. Throughout her 17-year career as a journalist, she’s written about a variety of topics, ranging from the restaurant industry and technology to health and fitness. Her byline has appeared in a number of newspapers, magazines and websites, including Forbes, The Kansas City Star and American Fitness magazine. She also serves as the managing editor for FastCasual.com.