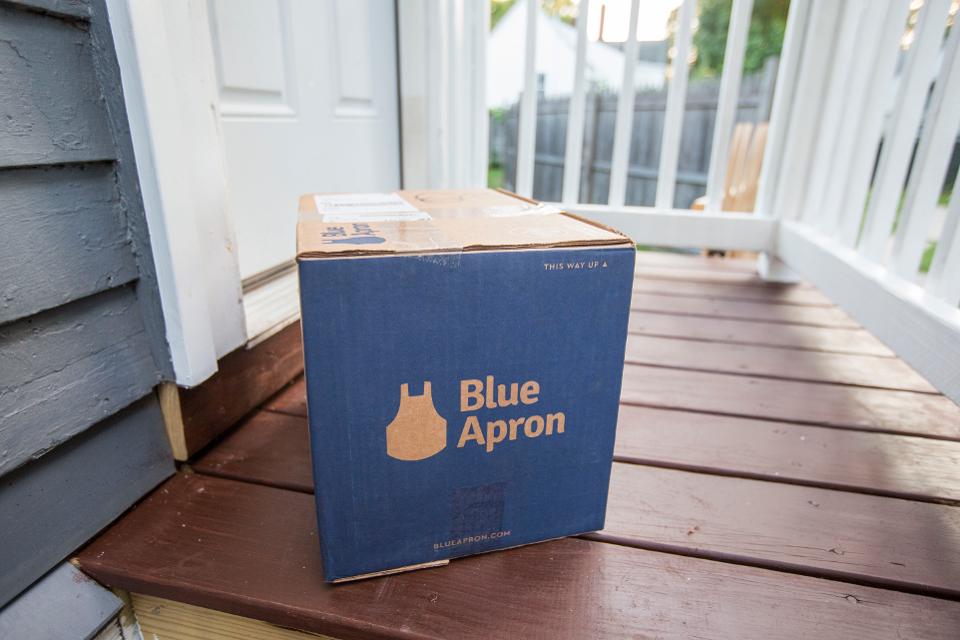 As American consumers hunker down to stem the spread of coronavirus, they may well add fuel to the already-growing grocery and food delivery sales—and give new hope to the struggling meal kit company Blue Apron.

Blue Apron saw its stock surge more than 70%, to $6.55, on Tuesday as investors bet that its service will regain some favor with consumers who are “social distancing.” That gain was noteworthy considering Blue Apron had seen its shares plunge to $2 in late February—from $150 in June 2017—after it reported another year of losses and declines in sales and customers.

Online grocery delivery is also surging. Sales through Amazon Fresh and Instacart, which delivers for retailers like Costco, almost quadrupled between March 12 and 14 compared with the same period a year earlier, according to the most recent data from Rakuten Intelligence in a study of online receipts. That far outpaced the year-to-date growth rate of 85% these two delivery services saw.

About a third of consumers said they used online grocery pickup or delivery services in the week through Friday, from those provided by grocers including Walmart, Amazon and its Whole Foods unit, and Target, according to analyst Chuck Grom of Gordon Haskett, which surveyed 300 American households on Friday. More than two-fifths of those consumers who used those services said that was the first time they had tried online grocery orders.

Consumers aren’t ordering just groceries online. Overall, e-commerce sales have risen more than a third in recent days, double the year-to-date pace, according to Rakuten Intelligence. That growth rate may pick up even more with apparel and shoe retailers from Nike to Urban Outfitters shutting stores and encouraging customers to buy online.

Amazon recently said it’s adding another 100,000 jobs at its fulfillment centers and delivery network as it’s seen “an increase in people shopping online” because of the outbreak. The company also said it’s sold out of some household items.

Online grocery shopping isn’t the only thing that could become more mainstream. Restaurants’ push into delivery is becoming a full-on focus as chains from Starbucks to Chipotle remove seats or close dine-in areas to accommodate only delivery or take-out orders. Fast-food giant McDonald’s said it’s “encouraging” all restaurants, mostly franchisee-owned, to move to drive-thru, delivery and walk-in-take-out orders. The company said it’s also stopping the use of self-service beverage bars and kiosks.

More than a quarter of consumers said in the Gordon Haskett survey on Friday that they had increased their use of restaurant delivery services including DoorDash, Grubhub and Uber Eats in the past week because of growing coronavirus concerns. More than half of those surveyed said they believe drive-thru reduces exposure.

Between Thursday and Saturday, U.S. food and restaurant delivery sales jumped 52% from a year earlier, more than double the 22% year-to-date average growth rate, according to Rakuten Intelligence.

If the habit takes hold, that will speed up the already-promising food delivery sales.

Before the coronavirus outbreak spiraled into the current pandemic, a UBS study had already forecast that convenience-seeking millennials would drive food delivery sales to rise an annual average of more than 20% to $365 billion worldwide by 2030, from $35 billion in 2018.