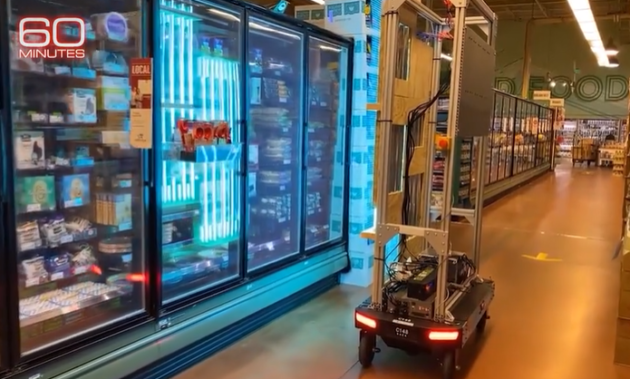 The rolling, UV-emitting robot is something Amazon is “working on for the future,” according to the 60 Minutes report. (Amazon via 60 Minutes)
BY TODD BISHOP
Source: www.geekwire.com, May 2020

Amazon is developing a robot that would roll through grocery stores and distribution centers, using banks of ultraviolet light to kill viruses on surfaces.

The company provided “60 Minutes” with video of a prototype of the robot for a report Sunday night about Amazon’s response to the COVID-19 crisis, and the backlash from workers who want the company to close down distribution centers for cleaning and disinfection when employees test positive.

Careful, creative, or creepy? Amazon says it uses its vast camera system for contact tracing and to try to enforce social distancing. It’s testing a UV-emitting robot that may one day in the future disinfect surfaces in warehouses or Whole Foods. https://t.co/dgN5YCucVM pic.twitter.com/kXvclrsIXO

It’s part of a technological show-of-force from the company, seeking to demonstrate its efforts to battle COVID-19 in the face of criticism from employees and others.

In addition, 60 Minutes reports that Amazon is “trying to enforce social distancing by videotaping all its employees and using artificial intelligence to study their movements.” The report notes that cameras are “also being used for contact tracing in order to identify workers who came in contact with a sick colleague and send them into quarantine.”

The segment describes Amazon’s UV-emitting robot as “something they’re working on for the future,” without providing a timeline or other details.

We’ve contacted Amazon for more details, and for comment on the 60 Minutes report.

It was the first glimpse of a concept that the company has hinted at previously. Brad Porter, vice president of robotics at Amazon, last week referenced the company’s work on “mobile ultraviolet sanitation” in a LinkedIn post that he wrote in response to the resignation of fellow VP Tim Bray over the company’s firing of employees who spoke out about the spread of COVID-19.

Was Amazon too slow to install workers’ protections? Some of its workforce think so, but Amazon vehemently disagrees. https://t.co/qiNYDzMpE5 pic.twitter.com/vb4ppUzSlO

The company has declined to disclose the total number of Amazon workers who have tested positive. Jana Jumpp, an Amazon worker in Indiana who has been tracking confirmed cases, told 60 Minutes that at least 600 workers have been diagnosed with COVID-19. Other reports have put the number higher.

The segment included video of Amazon workers in a packed break room, not wearing masks or protective equipment.

Dave Clark, Amazon’s senior vice president of operations, declined to confirm the number for 60 Minutes, telling correspondent Lesley Stahl that the case total “isn’t particularly useful because it’s relative to the size of the building and then the overall community infection rate.”

“Amazon is seen as an essential service through this pandemic, but you have been very slow to install your workers’ protections, and it’s hurt your reputation,” Stahl said to Clark. “You’ve been seen as a company that puts profits ahead of people.”

Clark responded, “I could not disagree more strongly with the premise that we’re late to this party. Quite to the contrary, I think we’ve been early on the curve to this (compared) to most employers, particularly major employers in the U.S.”

He said infections at Amazon facilities have been happening at a rate “just under” the infection rate in surrounding communities.

Among Amazon’s worker protections: temperature checks, masks at the door, rolling washing stations, and a disinfectant sprayed by workers in hazmat suits. Amazon is also working on a self-administered virus test for the future. https://t.co/rLrpLuyviw pic.twitter.com/fX8qzLVkvp

Via a remote video connection, Clark gave Stahl a virtual tour of an Amazon fulfillment center, demonstrating some of the measures the company is taking in response to COVID-19. They included a nasal swab test for workers, rapid temperature checks when people enter the building, disinfectant misting equipment, and mobile hand-washing stations.

Stahl last week detailed her own battle with and recovery from COVID-19.