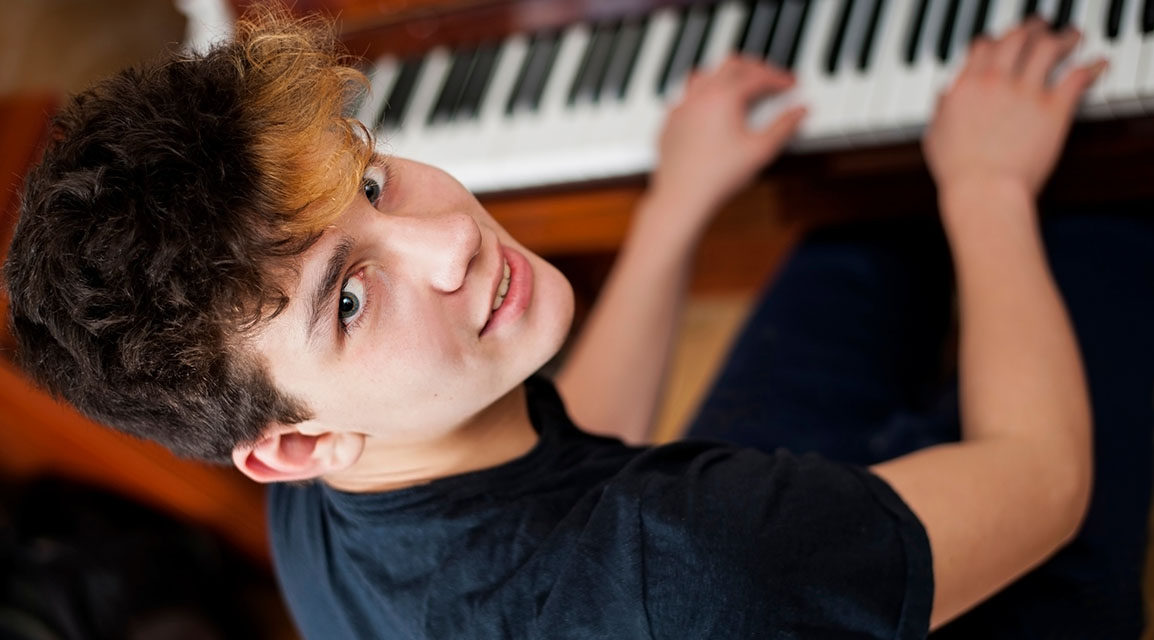 It’s a set of personal questions that have enormous economic implications, one asked on family Zoom calls and in market research surveys alike: Have you received your stimulus check yet? How have/will you spend it?  I’ve saved mine thus far, my best friend just bought a Yamaha keyboard with his. My mother paid down some debt, and a dear friend who has been out of work since the lockdowns began put his directly toward rent.

While it is indulgent to riddle this blog with so much personal anecdote, these questions are of utter importance when it comes to the nation’s economic recovery, its timetable, and the type of markets companies will operate in as lockdowns begin to ease.

The ways people use their stimulus checks speak to their economic outlook and the likelihood they will do their fair share of spending to get this consumer economy off life support. According to TrendSource’s recent market research surveys, thus far, the news has not been good, however. As we shall see, only 8.4% of our respondents have used their stimulus money for any kind of non-essential good, with the vast majority saving, paying down debt, or buying essentials like food.

So how are people spending their stimulus?

There are some click-bait headlines (ugh, Business Insider) announcing that Americans are buying “frivolous” things like weed, video games, and sex toys (really!) but even these sources acknowledge that the great deal of spending is going towards essential items, bills, and debt. It is sexier and more fun to talk about the fun stuff (literally sex, drugs, and games) but this perception is misleading at best, inaccurate at worst.

TrendSource’s recent market research survey data tells us that the vast majority of consumers are applying their stimulus funds to daily necessities and savings, reflecting their economic concerns while also causing concern that this lack of non-essential spending will make an economic recovery even more difficult. 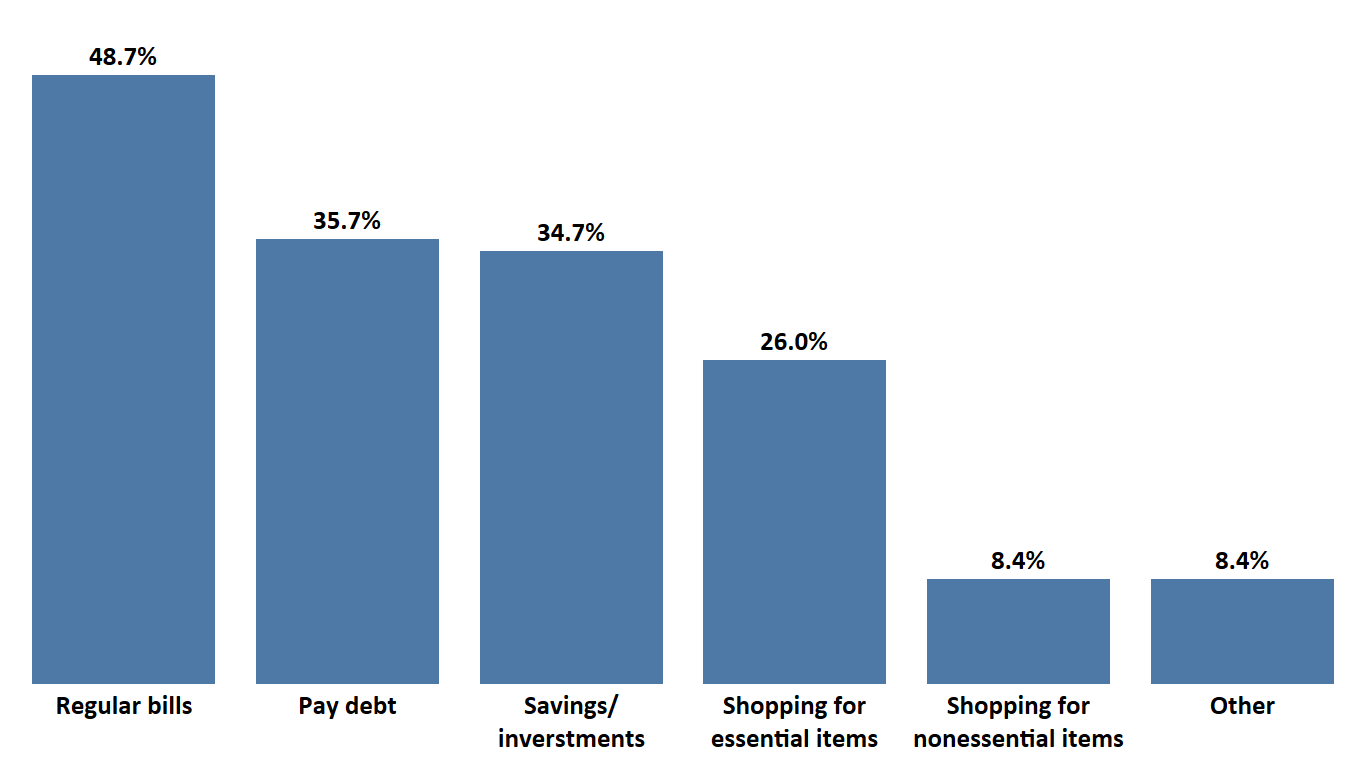 Indeed, nearly half our respondents report spending their stimulus checks on regular bills, roughly one-third on paying down debt and building up savings, 26% on essential goods like groceries and gas. Spending on non-essential items, however, like entertainment and fashion is limited, with only 8.4% of respondents spending even a portion of their stimulus check on such goods.

This tracks with recent news regarding the national savings rate, which climbed from 8% to 13.1%. This statistic, part of the calculus that goes into GDP, accounts for the percentage of money households are saving (income minus spending, divided by income). A 5.1% increase may not seem that huge, sure, but this is not the case–that increase is absolutely insane. It means that Americans are saving more of their income than they have since the early Reagan administration (1981).

Similarly, according to a Federal Reserve report, national credit card debt has declined to its lowest point in over 30 years. Some of that has to do with banks extending less credit as people are less desirable debtors when they are unemployed, but a lot of this also has to do with consumers reigning in their own spending and using their stimulus money to pay down debt. In short, this is not great news for our economic recovery. The United States is, for better and for worse, an economy based on consumer spending, which constitutes two-thirds of our GDP. 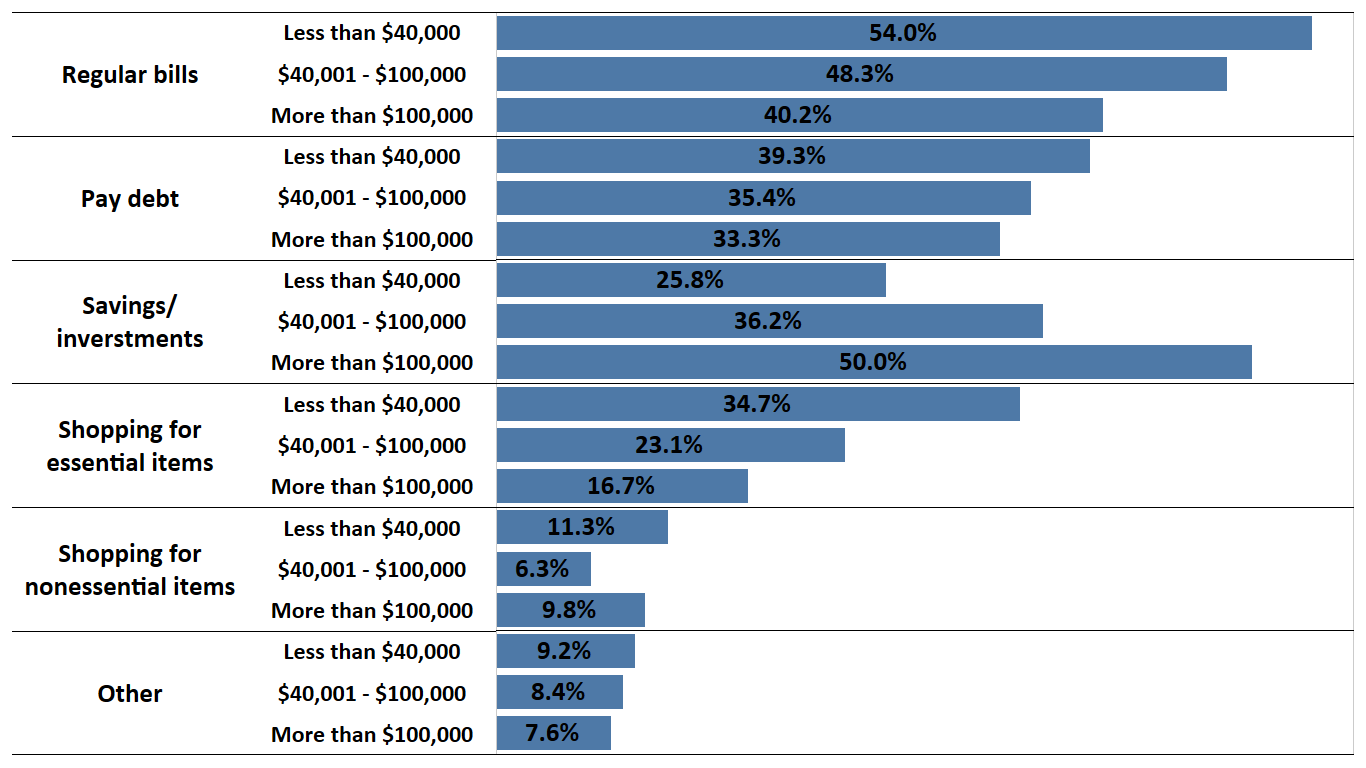 While non-essential spending is small among all income brackets, wealthier respondents were much likelier to report putting their stimulus checks towards savings and investments (50%) than bills (40.2%). This is in almost direct contrast to households earning less than $40,000/year, where 54% paid bills and only 25.8% saved or invested the funds.

This makes sense. Times are tough and it seems like they will get tougher. These people are making financial decisions that make sense for them and their household. These decisions have a lot to do with people’s feelings of unease about their own personal finances and the nation’s prospects of economic recovery.

It is also possible, however, that household income is not the best determinant of stimulus spending, or at least it should not be the only segmentation we consider. According to a study by Northwestern University’s Kellogg School of Management, liquidity is a much more accurate factor in people’s stimulus spending decisions.

People are worried about the country’s economic prospects moving forward. TrendSource asked respondents to characterize their concern about the nation’s economic future. The results were troublesome.

This data shows us that, despite government proclamations of reopenings and recoveries, consumers are concerned about the future and are adjusting their spending behavior accordingly. As the chief economist at RSM put it, “The consumer that constitutes the beating heart of the real economy is preparing for a much longer slowdown than what policymakers are telling them.”

Indeed, according to a New York Federal Reserve survey, 31.6% of respondents expected their households to be worse financially a year from now, and 21.9% expected their household income would decrease over the next year. Sure New York has seen the biggest coronavirus impact in the country, so it is not entirely accurate to project this onto the country writ large, but this data is nonetheless troubling.

As they said in summary: “The perceived probability of losing one’s job reached a new series high for the second consecutive month. Expected earnings, income, and spending growth each reached series lows.” That is as concise a statement as it is sobering.

NON-ESSENTIAL CATEGORIES WILL CONTINUE TO STRUGGLE

Because the majority of stimulus spending is being done by people with the least purchasing power, their stimulus checks are not going to durable goods like cars or big-ticket items, but rather food, gas, and other essentials.

Again, this nation’s GDP is two-thirds consumer spending and if people are going to continue avoiding non-essential purchases, that is bad news for brands, entire industries, and the national economy.

I’m sure all of my dear readers understand this simple principle, but if people are buying significantly less finished goods, ultimately, manufacturers will no longer be able to cover production costs, leading to layoffs and closures. This becomes a tailspin that swallows economies whole, as unemployment skyrockets and business go bankrupt. This doesn’t mean to say that we are at the edge of the economic earth, it just means we are starting to be able to see it from here.

Visa recently warned that the hardest-hit categories (travel, fuel, restaurants, and entertainment) have seen a 50% decrease in spending volume in April alone. Travel spending declined 80% in that same period. How long will it be until those numbers start to reverse course?

Restaurants did see a temporary bump (+300%) in the first few days after stimulus checks came through, but those numbers regressed soon thereafter, a likely celebratory splurge. The thing is, those splurges used to be on things like cars and iPhones, as was the case with stimulus spending in 2008.

But how can we expect people to worry about the new iPhone when they can’t pay their rent? Even fewer people were able to pay rent in May than April, with an estimated 11% only making partial payment and 22% none at all. And, as would be expected, it is worst among families earning less than $25,000/year, 41% of which missed their May payment.

People are saving their money and paying down debt, and only spending on essentials. They are scared about their economic future and it’s hard to blame anybody for the choices they make to protect their financial and mental stability.

It’s just that more of us need to be buying keyboards.