U.S. May Retail Sales Surge 17.7% In the Biggest Monthly Jump Ever 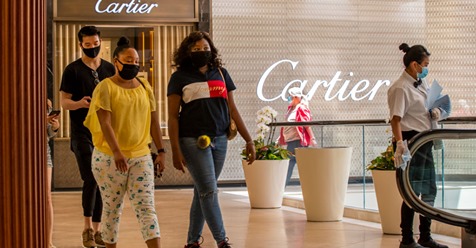 The 17.7% headline gain including food sales easily topped the record 6.7% from October 2001 — a month after the 9/11 terrorist attacks — and beat the 8% estimate from economists surveyed by Dow Jones.

Retail sales alone powered 16.8% higher from a month earlier, more than double the estimate of 8% from Dow Jones and reversing from a revised 14.7% plunge from the previous month. Clothing and accessories stores reported the biggest percentage gain at 188% while sporting goods, hobby, musical instruments and book stores rose 88.2%.

The government numbers, released an hour before the start of stock trading, added to an upbeat mood on Wall Street, with Dow rising more than 900 points in the premarket. By late morning, stocks were up more than 500 points.

President Donald Trump was quick to post on the news, tweeting that it “looks like a BIG DAY FOR THE STOCK MARKET AND JOBS!” even though there are no employment numbers out Tuesday.

Wow! May retail sales show biggest one-month increase of ALL TIME, up 17.7%. Far bigger than projected. Looks like a BIG DAY FOR THE STOCK MARKET, AND JOBS!

After being almost completely shuttered during the lockdown, food services and drinking places saw a 29.1% rebound in May. Some states began allowing outdoor dining during the month after the establishments were limited to curbside pickup and delivery.

While the monthly gains set records, the economy is still making up for lost ground.

Total sales were off 6.1% from a year ago as economists still expect the biggest annualized GDP in the second quarter that the U.S. has ever seen.