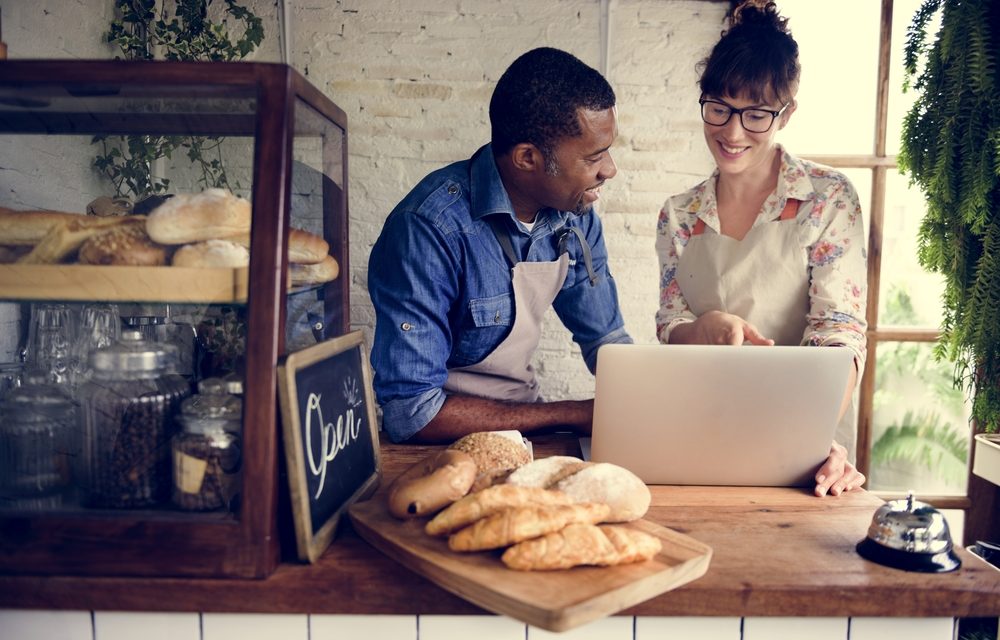 The Small Business Optimism Index increased 6.2 points in June to 100.6 with eight of the 10 components improving and two declining. Owners anticipate improving sales as the economy continues to re-open with expectations rebounding to a net 13% after April’s lowest reading in survey history (a net negative 42%). Small business owners continue to be optimistic about future business conditions and indicate they expect the recession to be short-lived.

“Small businesses are navigating the various federal and state policies in order to reopen their business and they are doing their best to adjust their business decisions accordingly,” said NFIB Chief Economist Bill Dunkelberg. “We’re starting to see positive signs of increased consumer spending, but there is still much work to be done to get back to pre-crisis levels.”

Other key findings from the survey include:

Down from May, 48% of owners reported capital outlays in the next 6 months, the lowest level since December 2010. Of those making expenditures, 32% reported spending on new equipment (down 3 points), 18% acquired vehicles (down 2 points), and 14% improved or expanded facilities. Five percent acquired new buildings or land for expansion and 9% spent money for new fixtures and furniture.

Twenty-two percent plan capital outlays in the next few months, up 2 points from May. Plans are trending up but remain at recession levels.

A net negative 31% of all owners (seasonally adjusted) reported higher nominal sales in the past three months, down 12 points from May. Re-opening the economy has been slow, especially in the services sector including travel, entertainment, salons, and other more public-facing businesses.

The net percent of owners expecting higher real sales volumes improved 37 points to a net 13% of owners. The historic 61-point drop over March and April has been followed by a 55-point increase over the past 2 months as owners are expecting higher sales with business re-openings.

Also improving from May, the net percent of owners reporting inventory increases went up 1 point to a net negative 14%. Inventory levels are surprisingly low. Owners had little time to manage their inventory position after the pandemic and had a drop in customers unexpectedly and quickly. Once states began to re-open, some owners had trouble getting some of the items for their customers.

The net percent of owners planning to expand inventory holdings increased from May by 5 points to a net 7% as sales improved. This is one of the highest readings historically and good news for growth.

A net 14% (seasonally adjusted) reported raising compensation, well below the 36% reading in February prior to the pandemic. A net 13% plan to do so in the coming months, up 3 points from May. Eight percent of owners cited labor costs as their top business problem.

Nineteen percent of owners selected “finding qualified labor” as their top business problem. The coronavirus disruption for millions of workers did not change the skills of the existing workforce. Consequently, there was no improvement in firms’ ability to find the skills required to fill their open positions.

Unchanged from May, 3% of owners reported that all their borrowing needs were not satisfied. Thirty-four percent reported all their credit needs were met and 54% said they were not interested in a loan. A net 3% reported their last loan was harder to get than in previous attempts. Overall, access to capital is not a serious problem, likely due to the popularity of the Paycheck Protection Program that most small business employers have accessed.

One percent reported that financing was their top business problem. The net percent of owners reporting paying a higher rate on their most recent loan was negative 9%, up 4 points. The Federal Reserve policies have driven interest rates to historically low levels. 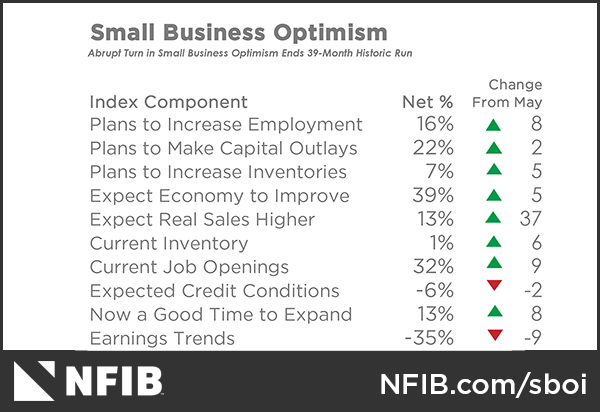 The small business labor market remains weak with signs of potential strengthening in the near term. Respondents reported reduced employment by 0.28 workers per firm on average over the past several months. Six percent (unchanged) reported increasing employment an average of 2.6 workers per firm and 22 percent (up 1 point) reported reducing employment an average of 4.6 workers per firm (seasonally adjusted). A seasonally-adjusted net 16 percent plan to create new jobs in the next three months, up 8 points and historically high. Thirtytwo percent (seasonally adjusted) of all owners reported job openings they could not fill in the current period, up 9 points. Twenty-five percent of the firms increasing employment also eliminated some jobs. Twenty-seven percent have openings for skilled workers (up 7 points) and 11 percent have openings for unskilled labor (up 1 point). Twenty-three percent of owners reported few qualified applicants for their open positions (up 4 points) and 20 percent reported none (up 2 points). Forty-one percent of the job openings in construction are for skilled workers. Fifty-one percent reported hiring or trying to hire in June, up 7 points. Forty-three percent (84 percent of those hiring or trying to hire) reported few or no “qualified” applicants for the positions they were trying to fill, up 6 points. 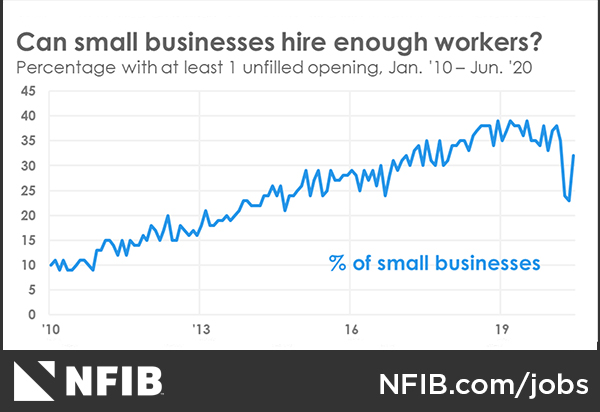 Forty-eight percent reported capital outlays in the last 6 months, down 4 points from May. Of those making expenditures, 32 percent reported spending on new equipment (down 3 points), 18 percent acquired vehicles (down 2 points), and 14 percent improved or expanded facilities (down 1 point). Five percent acquired new buildings or land for expansion (unchanged), and 9 percent spent money for new fixtures and furniture (down 1 point). Twenty-two percent plan capital outlays in the next few months, up 2 points from May. Plans are trending up, but still remain at recession levels.

A net negative 31 percent of all owners (seasonally adjusted) reported higher nominal sales in the past three months, down 12 points from May. Sales look stronger in the last few weeks of June. The net percent of owners expecting higher real sales volumes improved 37 points to a net 13 percent of owners. The historic 61-point drop over March and April has been followed by 55-point increase over the past two months as owners are expecting higher sales with business re-openings.

For the balance of the year, the fortunes of the economy will be primarily dictated by the course of the Covid-19 virus and the responses of our governments, federal, state and local. The most effective policies for defeating the virus are the worst for the economy, short of the discovery of improved therapies and a vaccine that will prevent infection.

Meanwhile, small business owners will have to deal with the “roller coaster” economy that the myriad of government policies (and policy adjustments) has created. The “lockdown” produced a record number of layoffs and claims for unemployment benefits. Most of the “unemployed” (about 80%) expect to be recalled to their job in a reasonably short time. The Federal government established the PPP to help small businesses maintain their employment levels. Most small businesses applied and received a loan that they can convert to a grant under certain circumstances. Checks were mailed to virtually everyone to support spending, but it was hard to spend in the lockdown except on the internet. Overall, trillions of dollars rained down on the economy.

A $600 supplement to unemployment benefits was also established. Unfortunately, this made the total unemployment benefit higher than many lower wage workers could earn returning to their jobs, which made it more difficult for some firms to fill open positions. Even with 5 million rehired in June, the number of unemployed remained at 18 million.

Unable to go shopping, the money piled up, producing a record savings rate of 33% in May, down to 23% in June when spending picked up. Spending among lower income consumers has nearly returned to pre-recession levels. But this is not the case for higher income consumers. Their spending has lagged and is crucial to the recovery going forward. So, the speed of the recovery will depend on how quickly governments reopen the economy and how safe consumers feel about going back out and resuming more normal levels of economic activity. For the next few months, the volatility of economic information will look like the NFIB charts in this report as the small business sector represents about half of the economy. Unemployment rates will improve but remain historically high, job creation will show well until all of the PPP deadlines pass and owners have adjusted employment to the new spending reality, all shaped by government regulations and the willingness of consumers to get out of the house.