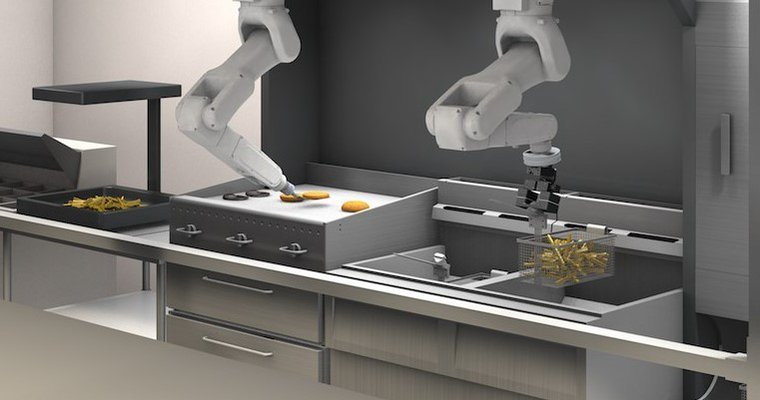 White Castle will deploy Flippy ROAR, the newest version of the machine that puts the robotic arm on a rail to remove it operationally from taking up kitchen floor space. (Image: Miso Robotics)
by S.A. Whitehead
Source: www.qsrweb.com, July 2020

In just about two months, White Castle will become the nation’s first fast food brand to deploy that robotic fry-master, known as Flippy. The 99-year-old Columbus, Ohio-based privately held chain said that in September it will test Flippy’s newest incarnation, Flippy ROAR (ROAR stands for Robot On A Rail) at an undisclosed White Castle store in the Chicago area to – in the case of this test – prepare French fries round-the-clock.

Though some may view it as somewhat odd that one of the nation’s oldest burger QSRs is becoming the first quick-service concept in the U.S. to deploy this very breaking edge technology in one of its stores, White Castle Vice President Jamie Richardson said the move represents the brand’s operating ethos to build its kitchens into futuristic, efficient customer-pleasing production centers for those fries, along with the chain’s ever-growing assortment of sliders and other fast food staples.

Monday afternoon, Richardson, sat down with Buck Jordan, CEO of Flippy’s creator, Miso Robotics, to answer some of QSRweb’s questions about how the so-called robot-on-a-rail concept came about and where White Castle plans to go with it, if the upcoming test proves successful.

Q: Now, first off, since Flippy has a bit of “history,” tell us how the robot has affected the fast casual concept where it has been deployed and other stadium-based food vendor?
JORDAN: We started out with CaliBurger, which we’ve installed in Fort Myers, Florida and they put in an $11 million order for about 100 more. They’re they’re wildly enthusiastic. They’re trying to turn themselves into a one of the most tech-enabled chains as they possibly can be.

Then, with (another Flippy customer that handles) the concessions at Dodger Stadium … we dramatically changed the operations of that business and really saved the concept … (that offers) fresh-breaded never-frozen chicken. … Now they have perfect, succulent chicken every single time because we are actually able to temperature-test the center of the chicken, feed that back into the AI and they can actually adjust cooking times dynamically to achieve what they need.

“I’m characterizing (this) as something like, you know, with the lunar landing and “One small step”? Well, this is like, one small fry drop for Flippy, one giant leap forward for the fast food industry.” -White Castle Vice President Jamie Richardson

Q: Have those successes – particularly with cooking the chicken at Dodger Stadium — changed Flippy’s popularity or mission going forward and if so, how?
JORDAN: (The machine’s Dodger stadium performance) was exactly what a corporate chef wants. And so, for the first time ever, if you were talking to the corporate chef, he would say he is excited because he now has an ability to elevate the menu to insert more complex items and complex food preparation, because a robot is doing it.

Q: What lessons have occurred and how are they changing the machine you’re installing at White Castle this fall on a test of the new Flippy ROAR (for Robot On A Rail)?
JORDAN:We really learned that we needed to get out of the aisle. So the old product used to be in a cart-based system that used to be in the aisle (of the restaurant kitchen). Now we’ve flipped it upside down. It’s an industrial robotic arm that hangs on a rail that can slide between workstations.

So not only do we get out of the aisle, but now we’ve opened up the ability for Flippy to do multiple tasks. It can dip fries and then flip burgers and then it can also do food prep. So you’re getting more utility in the same piece of equipment.

Q: Now to Jamie Richardson at White Castle, I wonder if you can tell us when the brand first started looking at this robotic option and why?
RICHARDSON: For the last several years we’ve been focused on how can we make the kitchen of tomorrow happen today. And so when we first heard of Flippy, we reached out and started a great constructive partnership and conversation almost 15 months ago. And it’s been an ongoing development … that puts us into the space we find ourselves today. And I’m characterizing that as something like, you know, with the lunar landing and (Neil Armstrong’s famous quote upon stepping onto the moon in 1969) “One small step.” Well, this is like, one small fry drop for Flippy, one giant leap forward for the fast food industry.

So, we’re going to be the first to be able to do this and we’re looking at one test ‘Castle,’ just like we’ve started anything with one restaurant and learn from there and expand as we go. It will happen in September, … and it’s going to be our Chicago region … in the beginning, (at) one store. And what we’ll do is learn from that.

“Our business model is really “robots as a service” and by next year to be able to just give it away for free, then charge a monthly recurring (charge). So now, it’s about $30,000 up front and $1,500 a month, but we think mid-next year it’ll be more like zero down and possibly the same or maybe even increased (monthly cost).”

Q: So if you can, Buck, tell us, how you actually retrofit Flippy ROAR to White Castle kitchens, as well as how the machine will change the rate of production and the way the team works together at the store level?
JORDAN: This is key in not requiring customers to rip out their kitchens. … It’s basically suspended overhead, so it’s a frame that will slide underneath the hood, and then we’ll operate from there. …

With regard to how it affects operations … obviously, (with Flippy) you’ve got a tireless worker that cooks things perfectly every single time – there’s never going to be any deviation from the … (brand’s) recipe on how you cook food, which is a first. Also, it produces dramatically reduced food waste because we’re precisely measuring what goes into the fryer.

Beyond that, we believe, increased freshness and consistency. And so, what we can do right now is — because we have computer vision and artificial intelligence in the the kitchen, we’re able to really kind of … quarterback the back-of-house team … so it’s hot and as fresh as possible for the customer. …

That’s really, really important for delivery … when really every second counts when it comes to freshness and being hot. And so we think we can affect all sorts of change in kitchens.

Q: Now, Jamie, the kind of the proverbial “elephant in the room” here involves cooks and their future with White Castle. Can you give us an idea of how the brand has been talking to them about the introduction of Flippy?
RICHARDSON: We want to feature this as a tool for empowerment, not replacement, and that’s who we’ve always been over generations. So, we shared the news about Flippy at our leadership conference back in the ancient days of February when you could still gather together pre-COVID-19, for our annual conference, with all of our general managers … and the announcement of Flippy was made. It was greeted with universal enthusiasm because we see this technology as a tool to empower our teams.

The big thing for us is that when you’re back-of-house and you’re in the kitchen, there’s always art and science that shapes every single shift. For us, this is an investment in the science, so we can allow our team on the ground to invest more of their time in the art of things and figuring out things like (in the drive-thru), “Hey, do I pull this car out to get that order out to them a little bit sooner because the car right ahead of them ordered 100 sliders?” …

So this doesn’t limit the number of people we’re going to employ or the hours. What it does do is it lets us be more precise. And the other thing for us, as a family-owned business that’s been around for so long, we’ve been running 24-hour shifts at 90% of our restaurants since 1920 and the variability that happens in the course of a 24-hour day is immense.

So you do everything you possibly can to schedule as best you can to have that covered but then someone’s not feeling well, or they don’t come in. Having Flippy on the line lets us know that that position is going to be covered 24 hours a day, regardless.

Q: What then, is Flippy’s cost to restaurants at this point in time?
JORDAN: We’ve been aggressively trying to cost it down. So where the old product that was in Dodger Stadium cost about $60,000 to $65,000, the product right now costs about $31,000 or so. Then we believe that by the middle of next year, we’re going to be able to make the upfront costs absolutely free because we are costing the system so aggressively.

Our business model is really “robots as a service” and by next year to be able to just give it away for free, then charge a monthly recurring (charge). So now, it’s about $30,000 up front and $1,500 a month, but we think mid-next year it’ll be more like zero down and possibly the same or maybe even increased (monthly cost).

Q: Is that cost dependent on how much the machine is used or does it cover the entire operating day, which in White Castle’s case is quite often around the clock?
JORDAN: It’s 24 hours a day. So really the name of the game is to get as much utilization out of it as possible. And that’s why we embraced the robotic arm as opposed to, for instance, a mechanical solution, because a robotic arm can essentially do anything a human arm can do.

Q: So then, Jamie, what does White Castle leadership carry in its collective mind as an image of success for the September test of Flippy that might mean, for instance, that the brand would press forward with installing it nationally?
RICHARDSON:I think the thing that matters the most is how can we give our customers what they crave and we know what they crave the most is hot and tasty, affordable food. So this is going to allow us to produce more food and higher quality to meet that need. So those are the things we’re going to be measuring against.

We want to get all the learning we possibly can to understand how to optimize it, and then we would gauge our investment accordingly from there.

Q: So for the store staff, Buck, can you give us an idea how restaurant team members have welcomed — or not welcomed — this robot into their ranks previously, like at Dodger Stadium, which you’ve said was a union shop, for instance?
JORDAN:So in that case, the union approved us having the robot in in their kitchen, which I was kind of curious to see how that was going to turn out. But you know, they ended up loving it because, like I said, frying is a difficult job and now (Flippy’s) coworkers love it specifically because they can go from doing that to more front-of-house work.

Likewise, you know, you’re working next to really advanced technology. It’s very simple and easy to use. So by a large extent, there were a lot of happy faces back there, because we’re making their lives easier and making them more efficient.