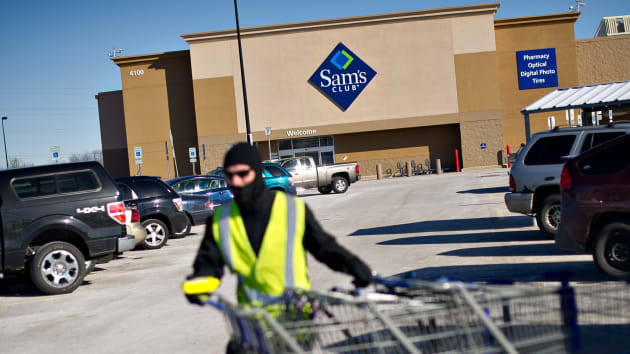 Sam’s Club is known for its big and bulky items, from giant packs of paper towels and supersized containers of laundry detergent to huge bags of snacks that can feed a party.

This holiday season, however, the Walmart-owned warehouse club is shrinking the size of some foods to better fit Americans’ plans for scaled-down holiday celebrations during the coronavirus pandemic.

Megan Crozier, Sam’s Club’s chief merchandising officer, said the retailer added smaller packs during the pandemic as Americans’ routines changed. It reduced the size of items, including brownie packs and cake mix. She said the petite packs sold well, so Sam’s Club decided to keep them and make holiday-themed additions.

Customers will find holiday hams in three sizes: 4 pounds, 7 pounds and 10 pounds. They can buy green beans with garlic herb butter, sweet potato mash with cinnamon butter and mac and cheese — all packaged as side dishes for a family of four. And packs of yeast rolls are a third of the typical size — a dozen instead of 36-count.

Sam’s Club is shaking up its holiday plans in other ways, too. It’s stretching out its holiday savings events from October to December to lower the odds of big crowds and long lines, which could contribute to the spread of Covid-19. The retailer already had its first holiday sale, which began Oct. 4. For the first time, it is mailing a big book of holiday deals to members’ homes in late October, so they can browse and put together their shopping list. And it’s hiring 2,000 supply chain employees to keep up with increased demand and avoid out of stocks.

These steps come as the Centers for Disease Control and Prevention urge Americans to make smart choices this holiday season. They have suggested recipe swaps and Zoom gatherings this year over high-risk activities like traveling to an indoor gathering of extended family and friends.

The warehouse club won’t be the only grocer selling smaller entrees and side dishes as the holidays approach. Ken Harris, managing partner at Cadent Consulting Group, said he’s heard from many consumer packaged goods companies that plan to change their sizing. He said Americans are not only looking for items that suit their more intimate gatherings, they’re also gravitating toward packs that fit better in their budgets during the recession.

He said consumers will see shrunken celebratory staples at stores, from boxes of stuffing and jars of gravy to cranberry sauce and cheeses.

“You can go through your holiday shopping list, and those are going to be offered in smaller sizes,” he said.

“The opposite of ‘supersizing’” is another retail trend the pandemic has accelerated, he added. Other factors, from consumers’ desire for portion control to the growth of dollar stores and online shopping, had already pressured companies to skinny down their sizes. In some cases, he said, the new design can be a win-win for companies and customers. He pointed to the slim can of Coca-Cola, which benefited waistlines and company margins.

Kroger, the country’s largest supermarket operator, said it will stock its shelves and fridges differently for the holidays, too. About 43% of shoppers plan to celebrate Thanksgiving at home with only those in their immediate household, according to research by Kroger’s data science and analytics firm, 84.51.

The grocer has bought turkeys of all sizes to fit any guest list and stocked a variety of proteins, like ham, pork roast, plant-based proteins and seafood, that first-time holiday cooks may opt for instead, company spokeswoman Kristal Howard said.

Beth Breeding, spokeswoman of the National Turkey Federation, said sales of the classic holiday entree may look out of the ordinary, too. About 40 million turkeys are consumed around Thanksgiving every year. She said some people may buy a smaller bird or decide to cook turkey breast or turkey thighs instead this year.

“We are going to see a mix on holiday tables this year,” she said.

The trade group is preparing resources to help Americans adapt, Breeding said. It is putting together a guide for people tackling their first turkey this Thanksgiving, since they can’t fly home or spend the day with family, and offering instructions on how to cook these alternatives, such as a single turkey breast.

And, she added, it will suggest what to do with something Americans may have more of this year: Leftovers.