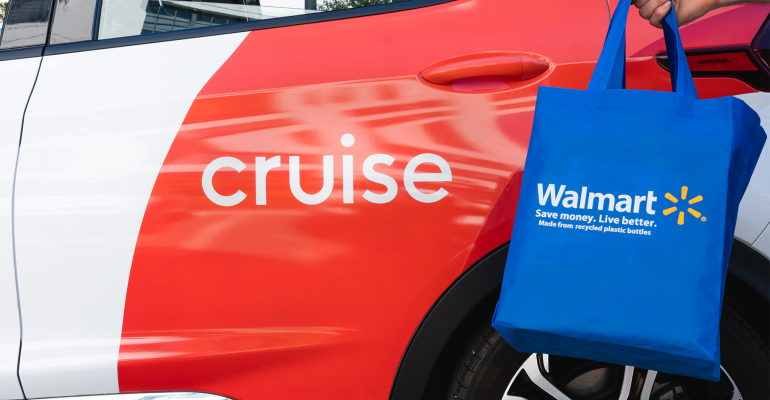 As part of the Walmart pilot, customers can place an order from their local store and have it delivered, contact-free, via one of Cruise’s all-electric self-driving cars.
By Michael Browne
Source: www.supermarketnews.com, November 2020

Partnership with Cruise will bring fleet of 100% renewable-energy vehicles to Scottsdale, Ariz.

Beginning in 2021, Walmart will launch a pilot in Scottsdale, Ariz., with self-driving car company Cruise to operate an entire fleet of all-electric delivery vehicles powered with 100% renewable energy. The project will support the retail giant’s initiative to reach zero emissions by 2040.

As part of the pilot, customers can place an order from their local store and have it delivered, contact-free, via one of Cruise’s all-electric self-driving cars.

“Technology that has the potential to not only save customers time and money but also is helpful to the planet is technology we want to learn more about,” said Tom Ward, senior vice president of customer product, Walmart U.S., in a blog posted on Tuesday.

“This year, we’ve had our foot on the accelerator expanding our pickup and delivery services, so customers can get the items they need quickly and safely,” he continued. “In April alone, we launched Express Delivery and have since scaled it to more than 2,800 stores, reaching more than 65% of American households.”

While the pilot is focused on renewable energy, it is not Walmart’s first foray into self-driving delivery vehicles. Earlier this year, the retailer tested the unmanned Nuro R2 delivery vehicle — which only hauls products and has no onboard driver or passengers — in Houston, as well as autonomous Toyota Priuses to bring Walmart online grocery orders to customers’ homes. Both vehicles are powered by Nuro’s self-driving software and hardware.

In July 2019, Walmart announced it was working with Gatik on a “middle-mile” logistics pilot using the tech startup’s self-driving Ford Transit Connect vans to help move goods from the Walmart Supercenter in Rogers, Ark., to a Walmart Neighborhood Market in nearby Bentonville.

Other Walmart partners in pilots of self-driving vehicles for online grocery delivery have included Udelv (in Surprise, Ariz.), Ford (in Miami-Dade County, Fla.) and Waymo. In the test with Waymo (formerly Google’s self-driving car project), conducted in Chandler, Ariz., autonomous vehicles pick up customers at their homes and take them to the store to collect their orders.

More recently, the company has been testing unmanned drone grocery delivery in North Carolina, with Flytrex.

“You’ve seen us test drive with self-driving cars in the past,” Ward said, “and we’re continuing to learn a lot about how they can shape the future of retail. We’re excited to add Cruise to our lineup of autonomous vehicle pilots as we continue to chart a whole new roadmap for retail.”

In addition to electrifying and zeroing out emissions from all of its vehicles, including long-haul trucks, by 2040, Walmart, with over 11,500 stores worldwide, is building on its long-standing commitment to climate action by also harvesting enough wind, solar and other renewable energy sources to power its facilities with 100% renewable energy by 2035, and transitioning to low-impact refrigerants for cooling and electrified equipment for heating in its stores, clubs and data and distribution centers by 2040.