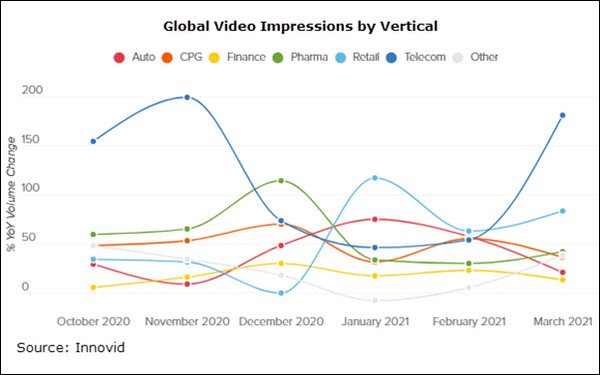 Driven by the race to attract customers for their expanding 5G networks, telecom advertisers’ global video impressions shot up 181% year-over-year in March, with both CTV and mobile impressions “skyrocketing,” reports Innovid.

The vertical’s total included 239% YoY growth in TV impressions and 149% growth in mobile.  Mobile led in share of impressions, with 44%, followed by TV, at 41%.

Across all categories, video ad impressions grew 45% YoY during March.

In automotive, total video impressions grew 21%, driven by 93% growth in TV, which accounted for 59% of the category’s total impressions. More than half (57%) of automotive impressions were delivered to programmatic publishers in the period.