Women’s sports can do at least one thing men’s can’t, experts say: Get bigger 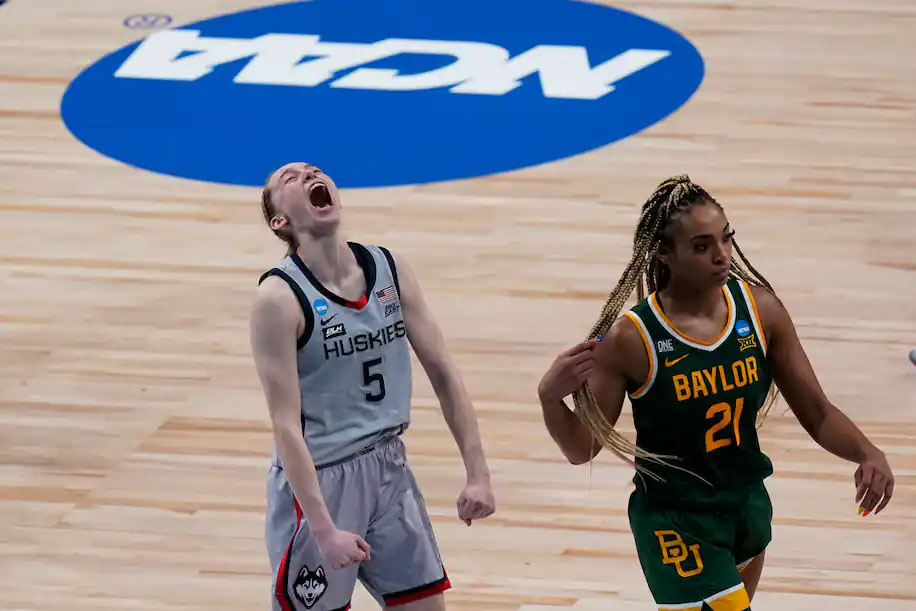 During a meeting of women’s basketball coaches with NCAA President Mark Emmert on Wednesday, Georgia Tech Coach Nell Fortner issued a plea. Instead of treating her sport like a cost to minimize, the NCAA should see it the way so many others increasingly do: as an opportunity for growth.

“We’re a huge potential revenue stream,” Fortner explained. “Our athletes stay [in college] for four years. They garner new fans. They get more attention and will continue to. I think we’re going to miss a huge window if we don’t change things now.”

The virtual meeting came after weeks of complaints of gender inequity that Emmert and the NCAA met with apologies but also rationalizations purportedly rooted in economics. In a fact sheet distributed to news outlets, the association said the women’s tournament loses millions every year and has to be subsidized by the men’s event.

Fortner wanted Emmert to change his thinking, and her appeal comes at a moment when plenty agree with her. There is a growing belief across sports that women are one of the best investments in the industry.

Ratings are up. Female athletes are steadily commanding more attention from fans and marketers. And brands and venture capitalists are pouring money into women’s sports.

As a result, TV and sponsorship revenue for women’s sports are expected soon to eclipse $1 billion globally, according to a recent report by the accounting firm Deloitte. About $467 billion flow through men’s and mixed sports, but that massive figure includes events such as the Olympics and tennis Grand Slam events, in which female athletes bring much of the value.

“The stakeholders on the commercial side of sports are constantly searching for the next frontier, the next growth play,” Dan Cohen, who leads sports marketing company Octagon’s media rights consulting division, said in an email. “It is clearly women’s sports.”

The finances of the women’s tournament presented by the NCAA say less about the event’s popularity than they do about the way the organization thinks about women’s sports, according to four media executives and industry consultants. The NCAA casts the tournament as an economic burden, but it has made little attempt to maximize its revenue, they said.

The NCAA sold broadcast rights for the men’s tournament to Turner and CBS in a 14-year deal worth $10.8 billion in 2010 and extended the deal for another eight years and $8.8 billion in 2016. The women’s tournament, by contrast, is packaged with a group of around two dozen college sports championships, including baseball, softball, hockey and wrestling. In 2010, ESPN paid $500 million to broadcast those championships over 14 years, an average of about $35 million a year.

An NCAA spokeswoman, citing a third-party analysis the association commissioned, said women’s basketball is responsible for just more than 15 percent of that deal. By that math, the women’s tournament brings in an average of $5.7 million a year in TV revenue. The NCAA claimed last week that the tournament loses $2 million a year.

But three people who have worked on media deals involving the NCAA, including two who worked on the ESPN deal, said the women’s basketball tournament is the prize of the package, delivering around a third of the deal’s value, which would make it worth closer to $12 million annually.

Between 2016 and 2019, the women’s championship game averaged nearly 4 million viewers, nearly double that of the baseball and softball series, the next most-viewed championships in the package. With 63 games, the women’s tournament, alongside the softball championships, also provides the most volume for ESPN and ESPN2. As a stand-alone event on the open market, analysts and executives speculated the tournament could fetch as much as $20 million a year.

The NCAA declined to comment. One former NCAA executive stood by the association’s figures, noting that part of negotiations with ESPN — including for women’s basketball — focused on promotion and guarantees to be featured on its main network as much as money. They added that the NCAA had made attempts to renegotiate the deal and the package, signed a decade ago, now is undervalued significantly.

The women’s tournament, meanwhile, continues to demonstrate it can deliver viewers. Saturday’s Connecticut-Iowa game averaged more than 1.5 million viewers on ABC; the following game, Michigan-Baylor, then pulled more than 1 million. On Monday night, Connecticut-Baylor drew an audience of more than 1.7 million on ESPN.

Scrambled by the pandemic, nearly every major men’s sport has struggled to retain viewers over the past year, with audiences shrinking for everything from the NBA Finals to the Super Bowl. But amid those drops, the WNBA and National Women’s Soccer League scored notable increases, thanks in part to more exposure on cable and broadcast TV.

Those gains come on the heels of the 2019 Women’s World Cup, which delivered record audiences in the United States and Europe, prompting a new wave of investment in women’s soccer from Europe’s biggest club teams.

The booming interest can be attributed to a confluence of factors. Four decades after Title IX, the infrastructure around women’s sports has improved over multiple generations. The cost of entry to stream or broadcast women’s sports remains relatively low, even as the value of live content in a fracturing media landscape grows. The players are also deftly marketing themselves, often on social media, proving their viability to advertisers at a time when consumers, especially young ones, value supporting women’s empowerment.

The proof is in the steady stream of new business deals, from new TV rights deals to sponsorships, marketing opportunities and programming that supports women’s sports.

WNBA Commissioner Cathy Engelbert said she had been thinking about how to increase valuations for her teams, from sponsorships to creating new media packages to sell to esports to gambling. The WNBA has lost more than $10 million a year since its inception in 1997, according to the NBA.

“We have a valuation problem here,” she said. “And it starts with marketing and partnerships.”

Last year, AT&T, Deloitte and Nike signed on to be a new class of marquee partners with the WNBA, and players were added to the NBA2K video game. Sky Sports and the BBC just agreed to pay around $20 million annually in broadcast and sponsorship fees to the Women’s Super League in the United Kingdom. The NWSL has added four national sponsors since last summer.

“We built a team like it’s an enterprise software company,” said Kara Nortman, a co-founder of the team and a managing partner at Upfront Ventures. “We have investors who are amplifying our brand, sponsors coming to us to reach an audience that isn’t the NFL. Sports is a prized asset, and men’s teams are very expensive. For us, there is this energy around building something and buying in at a price that could literally [rise in value 10-, 20- or 30-fold].”

Nortman teamed with Natalie Portman and former soccer stars including Abby Wambach and Mia Hamm for the bid. A group that includes Chelsea Clinton and Jenna Bush Hager invested in the Washington NWSL franchise. Many NWSL teams are valued at between $20 million and $100 million, according to two people involved in raising capital for teams.

For investors, persistent doubts about the commercial viability of women’s sports can help create value. A former executive at Discovery, Abby Greensfelder, recalled that when she worked in cable, advertising on female-centric programming was cheaper than programming geared toward men, even if the audiences were the same size. “It was a lagging understanding between the reality of where the female consumer was and where she was perceived to be,” she said.

Greensfelder recently formed her own production company, Everywoman Studios. Her first project is producing a documentary about the women’s national team’s fight for equal pay, which was recently bought by HBO after a bidding war. Octagon also sold a docuseries about gymnast Simone Biles to Facebook earlier this year.

“We wanted to tell the story of the women’s soccer team not just because it’s a universally resonant story but because people love this team,” Greensfelder said. “It was a commercial proposition first.”

Last month, Sedona Prince, a sophomore at the University of Oregon, posted a video to TikTok that showed a paltry set of weights provided for women’s basketball players inside the NCAA tournament bubble in San Antonio. It has been viewed millions of times, often contrasted with the state-of-the-art weight rooms set up for men’s players in Indianapolis.

Prince’s video recalled a tweet sent six years ago by star goaltender Hope Solo, who posted a photo of substandard field conditions before the U.S. women’s soccer team refused to take the field for an exhibition game.

The videos — and the action they sparked — demonstrate the way players drive progress in women’s sports.

The women’s soccer team famously went to court over equal pay, which netted them a better contract and raised the team’s profile. WNBA players opted out of their collective bargaining agreement in 2018 to renegotiate a new deal that tripled pay for star players. (Engelbert said her business initiatives will pay for the increases.)

The unions representing the WNBA and NWSL players and the women’s national soccer team also have ratcheted up sponsorship and licensing efforts, contracting with a group called OneTeam that also works with the players’ unions in the NBA, the NFL and Major League Baseball. A deal between DoorDash and WNBA star Chiney Ogwumike is one of the biggest the company has closed in 2021, according to OneTeam.

Then there is the growing power of social media. Beyond the influence it wields to push awareness for a cause, as evidenced by Prince, it also can be used to create monetizable followings, broadcasting content directly to fans without requiring the blessing of a media executive.

The pros are capitalizing. College athletes may soon. As the NCAA and state legislatures move toward allowing athletes to profit on their personal brands, women stand to benefit enormously.

Tony Pace, former chief marketing executive for Subway and now president of the Marketing Standards Accountability Board, said he had an “aha” moment when he began researching the athletes that brands may want to partner with.

“I was astonished to find that at Nebraska the biggest social media influencer with the largest following is not a football player,” he said. In fact, it is a volleyball player named Lexi Sun who has 77,000 followers on Instagram, 11.9k on Twitter and recorded a TikTok video on Nebraska volleyball that was viewed 90,000 times.

Opendorse, an endorsement company for athletes, calculated this week that of the players in the men’s and women’s rounds of 16 with the largest and most monetizable social media followings, eight of the top 10 were women, Axios reported. Paige Bueckers, a freshman star for Connecticut, has more than 730,000 Twitter and Instagram followers, which Opendorse estimated could be worth nearly $400,000 a year.

In the Deloitte report, the authors laid out several recommendations to maximize the business side of women’s sports, but for Cheryl Cooky, a professor of American studies and gender at Purdue who has studied media coverage of women’s sports, the takeaway was less about the specific guidance as the fact that Deloitte would make them.

“It’s not just feminist academics who are saying there is this opportunity in women’s sports,” she said. “It’s Deloitte now, too.”

Sally Jenkins contributed to this report.