May 25, 2021 | Industry Press Highlights, Media, Retail, Advertising and the Economy | 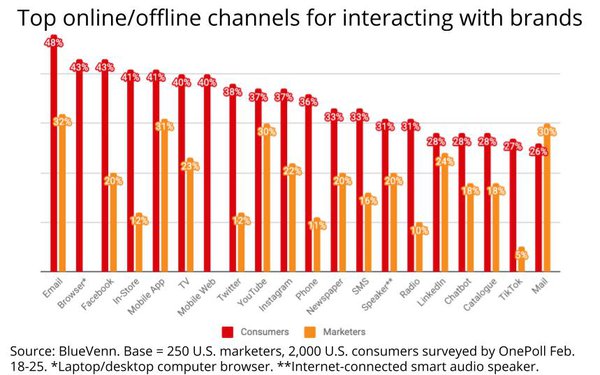 Marketers appear to have less value for many of the most commonly used traditional and digital media than consumers do, according to a new study that simultaneously surveyed separate panels of brand marketers and consumers.

The study, which was fielded in February by customer data platform BlueVenn, found a poll of 2,000 U.S. consumers put much greater stock in all media — especially email, Facebook, in-store, mobile apps, TV, phones, newspapers, SMS, radio and TikTok, than marketers do in terms of how effective they are in engaging consumers with brands.

The only media where consumers and marketers are near parity are YouTube and LinkedIn. And the only one where brand marketers actually place greater value than consumers is direct mail.

“The discord between consumers and marketers has left businesses struggling to adapt,” Upland BlueVenn Vice President-Marketing Anthony Botibl writes in the introduction to the aptly titled “Digital Divide: The Discord Between Marketers’ Actions and Consumers’ Behaviors” report.

“Many have resorted to simply doing more of the same; sending more emails, displaying more ads, running more discounts. And yet, consumer expectations are high, and many brands are missing out on sales by delivering experiences that consumers either don’t want or don’t see.”

Not surprisingly, given the notable disconnect, one third of the consumers said they don’t feel brands understand their needs (see below). 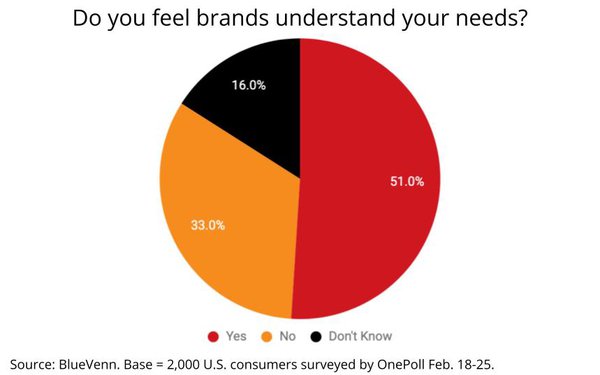 Joe, as usual in studies of this type, the findings raise more questions than they answer. For example the sample of “marketers” rated newspapers and “TV” about equally while radio performed at  half their level and magazines , I assume, weren’t even included or did so badly that they were a no- show in the table. Meanwhile, the big winner—among traditional media—was direct mail which topped “TV” by a huge margin. Yet these findings bear no relation to how advertisers allocate their media ad spending—even if one includes local marketers with their national counterparts. Seems odd, in my opinion, and raises quyestions about the validity of the study, itself. Is the sample representative of all “marketers”? If, so, were the desion making job titles properly represented? Did the respondents understand the questions? etc.

As for the “consumer” respondents, it’s a given that many people will not credit “TV” with having much influence on their buying decosions—even though it does— but, unlike the “marketers, the consumer rankings of traditional media seem more in line with reality.