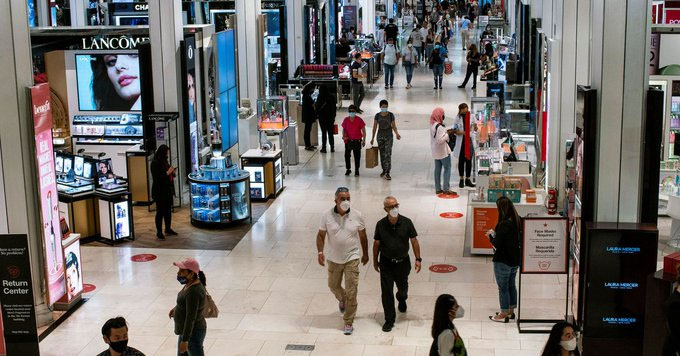 WASHINGTON, July 16 (Reuters) – U.S. retail sales unexpectedly increased in June as demand for goods remained strong even as spending is shifting back to services, supporting expectations that economic growth accelerated in the second quarter.

The rebound in sales reported by the Commerce Department on Friday was despite purchases of motor vehicles declining for a second straight month due to a lack of supply caused by a global semiconductor shortage. Sales were also flattered by higher prices resulting from supply constraints as COVID-19 vaccinations, low interest rates and massive fiscal stimulus fuel demand.

“Growing pains from reopening are on the supply side,” said Chris Low, chief economist at FHN Financial in New York. “Inflation reports earlier this week confirm firms are still struggling to keep up with this demand, but another month of high retail spending should give companies confidence that consumer demand is not slowing down anytime soon.”

Retail sales rose 0.6% last month. Data for May was revised down to show sales falling 1.7% instead of declining 1.3% as previously reported. Economists polled by Reuters had forecast retail sales dropping 0.4% in June.

Sales advanced 18.0% compared to June last year and are now 18.0% above their pre-pandemic level. Retail sales mostly capture the goods component of consumer spending, with services such as healthcare, education, travel and hotel accommodation making up the remaining portion. Restaurants and bars are the only services category in the retail sales report.

Demand shifted to goods like electronics and motor vehicles during the pandemic as millions of people worked from home, took online classes and avoided public transportation. Spending is now rotating back to services like travel and entertainment.

Though worries about inflation hurt consumer sentiment this month, spending was likely to remain underpinned by record savings and rising wealth. The University of Michigan’s consumer sentiment index fell to 80.8 early this month from 85.5 in June. The survey’s inflation expectations over the next 12 months shot up to 4.8% from 4.2% in June. read more

The government reported this week that consumer prices increased by the most in 13 years in June, while producers prices accelerated. read more

“Consumers are flush with cash and their credit card utilization rates and debt burdens have dropped,” said Scott Hoyt, senior economist at Moody’s Analytics in West Chester, Pennsylvania. “Lack of available cash or credit to spend is as small a restraint on spending as it ever is. Combined with massive forced saving, wealth is likely higher than it would have been without the pandemic.”

Households accumulated at least $2.5 trillion in excess savings during the pandemic. Starting this month through December some households will receive income under the expanded Child Tax Credit program, which should help middle- and lower-income households to maintain spending.

Stocks on Wall Street were trading lower. The dollar gained versus a basket of currencies. U.S. Treasury yields rose.

Receipts at auto dealerships fell 2.0% after declining 4.6% in May. But sales at clothing stores increased 2.6%, likely as people venturing outside their homes spruced up their wardrobes. Sales at services stations also rose, reflecting increased mobility and higher gasoline prices.

Online retail sales rose 1.2%, a modest increase given Amazon’s Prime Day, which was emulated by other retailers. Sales at electronics and appliance stores rose 3.3%.

“Last summer parents were trying to get their hands on basketball hoops and trampolines, and spending more time working in the yard or fixing up the house,” said Tim Quinlan, a senior economist at Wells Fargo in Charlotte, North Carolina. “This summer, the kids are headed back to camp or the family is ready to hit the road.”

Excluding automobiles, gasoline, building materials and food services, retail sales increased 1.1% last month after a downwardly revised 1.4% decrease in May. These so-called core retail sales correspond most closely with the consumer spending component of gross domestic product. They were previously estimated to have dropped 0.7% in May.

“Heading into the back-to-school season, we expect record sales as families purchase electronics, shoes and backpacks for in-person learning this year,” said Matthew Shay, president of the National Retail Federation.

Despite the downward revision to May core retail sales, economists remained steadfast in their belief that consumer spending, which accounts for more than two-thirds of U.S. economic activity, logged double-digit growth in the second quarter. Consumer spending grew at an 11.4% annualized rate in the first quarter.

Gross domestic product growth estimates for this quarter are around a 9% rate, which would be an acceleration from the 6.4% pace notched in the first quarter. Economists believe the economy could achieve growth of at least 7% this year. That would be the fastest growth since 1984. The economy contracted 3.5% in 2020, its worst performance in 74 years.