The Flip Side of the ‘Great Resignation’ — A Small-Business Boom 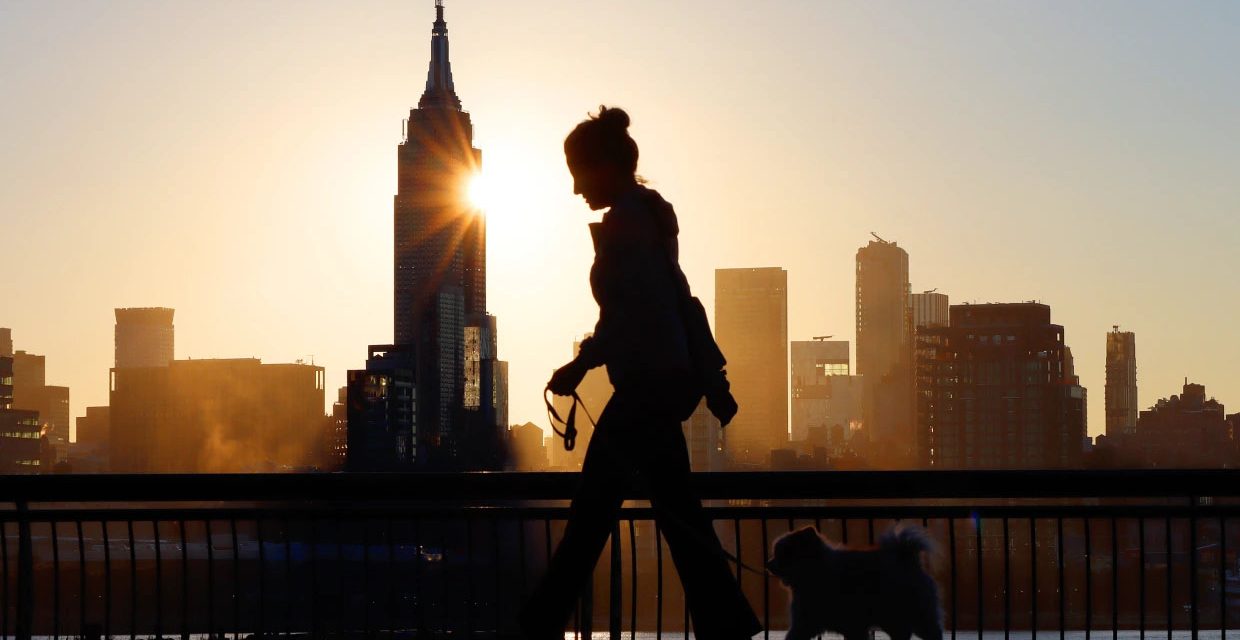 The sun rises behind the Empire State Building in New York City as a woman walks her dog along the Hudson River in Hoboken, N.J., on Sept. 25.Gary Hershorn / Getty Images file
By Martha C. White
Source: www.nbcnews.com, December 2021

A surge in new business formation suggests that the coronavirus pandemic has created a landscape in which entrepreneurs and startups can thrive and new innovations can break ground.

“This time has been really fertile. We’ve seen a huge increase in new businesses since the pandemic started,” said Julia Pollak, the chief economist at ZipRecruiter. “There are more opportunities out there.”

Government data show a record gap between the number of job openings and the number of unemployed people — 11 million versus 7.4 million. While that’s a headache of epic proportions for hiring managers and human resources directors, economists and labor market experts say there is a significant silver lining.

The Census Bureau’s Business Formation Statistics dataset shows a surge in the number of people filing tax paperwork to start new businesses. From January through November, just under 5 million new business applications were submitted, a jump of 55 percent over the same period in 2019. What’s more, a significant number of them are what the Census Bureau refers to as “high-propensity applications,” which means they are likely to create new jobs.

“There are a few big themes happening,” said Dave Carvajal, the CEO of Dave Partners, a recruiting firm focused on the tech industry. “There’s a large amount of money that’s going into venture-backed startups.”

Much of it is driven by the ascendance of digitally native consumers and workers — and the pandemic did the rest.

“The way people want to operate and the way they think is changing — and the new technology companies that are developing these technologies and systems facilitate that,” Carvajal said. “The way these people think is totally different from past generations. What this pandemic has done is accelerated a lot of these behavioral patterns. … It was quite a catalyst.”

You realize you’re working overtime every week. If you’re doing it, you may as well be doing it to make your own company.

Frank LaMonaca, a certified mentor at SCORE, a program that offers executive mentoring for entrepreneurs, said the pandemic opened an unexpected “window of opportunity” for people hungry to go into business for themselves. “What it did give them was the time to reassess the future of work in their life,” he said, adding that the two most popular SCORE workshops are in business fundamentals and social media marketing.

Danielle Neal, a second grade teacher in Baltimore, worked with SCORE mentors to hone her business skills. “I loved teaching, but … it was time for me to leave, essentially,” she said. So she resigned in May when the school year ended to turn what had been a side project helping small businesses navigate social media into a full-time enterprise.

“The market is there. Small-business owners want to put themselves out there, but they don’t understand the social media world,” Neal said, adding that she hopes to be able to expand enough next year to hire. “Long term, I’d like to hire people. … I want my own agency with other employees.”

For some former worker bees, the turning point was seeing their work responsibilities multiply in the wake of the pandemic. The pressure of juggling simultaneous office-based and online programs when her Florida-based employer reopened prompted Chelsea Kidd to come to a realization.

“I was back in the office and also supporting a lot of virtual initiatives. It had been a pretty challenging two-pronged approach to work,” she said. “You realize you’re working overtime every week. If you’re doing it, you may as well be doing it to make your own company.”

Kidd, who also was mentored by SCORE, resigned in late 2020 and moved from South Florida to Montana this year to launch SiteWell Solutions, a wellness consulting business focusing on remote workers.

The ability to work at home broadens the workforce in many ways.

“I’ve been in corporate wellness for about 15 years, [and] I was just ready to fully take the leap,” she said.

LaMonaca said: “The other thing I think is a permanent change is the ability to work at home. It broadens the workforce in many ways.”

The uncoupling of demand for talent tied to particular locations isn’t just good for entrepreneurs. It’s also promising from a macroeconomic standpoint. Researchers say one of the factors that contributed to a tepid and uneven recovery after the Great Recession was a lack of new business development.

The current startup surge is also a tremendous benefit for some of the many workers who took advantage of the disruption the pandemic generated to take the next steps in their career paths.

“I think what shifted is, post-pandemic, this whole concept of remote-only opened up a world of new opportunities,” said Anand Balasubramanian, who left a job where he had worked for six years because greater acceptance of telecommuting gave him opportunities beyond Ames, Iowa, where he lives.

Balasubramanian said he had good relationships with colleagues and management at his old job, but he recently took a job at a startup based in New York City, with a dispersed workforce of about two dozen.

“In terms of my career, where I wanted to go, my personal journey is I wanted to experience a startup from the ground floor,” he said. “I want to learn how to build a marketing team. I’m going … in with the right attitude to learn.”

Carvajal said the fierce competition for talent gives workers the confidence to take gambles on high-stakes gigs or decide to go it alone.

“In a recession economy, people tend to stay in their jobs longer and they will tolerate being underemployed,” he said. “In the economy we’re in right now, people feel so secure that they’re really kind of reaching and aspiring for the bigger jobs, bigger growth and bigger opportunities.”