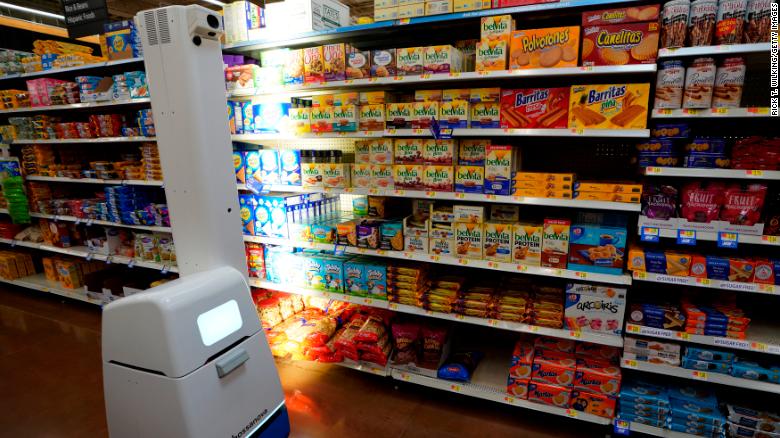 New York (CNN Business)Walmart and Target are taking different approaches to adding robots in stores, a split that will have an impact on the companies’ massive workforces and shape the future of automation in retail.

Both of these legacy brick-and-mortar companies are testing robots in their warehouses. Walmart (WMT), the country’s largest retailer and private employer, expects to add self-driving robots that scrub floors to 1,860 of its more-than 4,700 US stores by February. It will also add robots that scan shelf inventory at 350 stores and bots at 1,700 stores that automatically scan boxes as they come off delivery trucks and sort them by department onto conveyer belts.
Walmart’s 178,000-square-foot supercenters are expensive to operate, especially as more shoppers shift online. The company is adding robots to help it increase worker productivity and control costs. Walmart has around one million hourly workers in its stores.
The company says “smart assistants” will reduce the amount of time workers spend on “repeatable, predictable and manual” tasks in stores, allowing workers to switch to selling merchandise to shoppers and other customer service roles.
With the robots, Walmart will reduce the hours it assigns workers to unloading boxes and mopping the floors in some stores. That will lead to some employee attrition over time, the company says.
The “Auto-S,” Walmart’s shelf-scanning robot, moves around aisles and identifies which items are low or out of stock.
Grocery chains are also using robots in their stores. Stop & Shop and Giant Food Stores, owned by Dutch retailer Ahold Delhaize, are placing “Marty,” a tall, gray robot with googly eyes, in close to 500 stores. The bot roams around stores looking for spills. Albertsons is also testing a shelf-scanning robot in a few stores.
However, Target (TGT), which has around 1,850 US stores and 360,000 workers, has eschewed a robot-worker strategy.
The retailer has added self-checkout and automatic cash-counting machines to hundreds of stores in recent years. But Target CEO Brian Cornell said Wednesday his chain will not bring on the type of robots Walmart has deployed in stores.
“You won’t see robots in Target stores anytime soon. We really think, even in today’s environment, where people are talking about AI and robotics and different elements of technology, the human touch still really matters,” Cornell said. Target announced it would spend an extra $50 million in payroll hours during the holidays.
Carl Benedikt Frey, fellow at the Oxford Martin School at Oxford University and author of The Technology Trap: Capital, Labor and Power in the Age of Automation, said it makes less economic sense for Target to invest in robots than Walmart because it has fewer workers and smaller stores. More than 80% of Target’s stores are under 170,000-square-feet.
“Tractors were first adopted on larger farms and only later trickled down to some mid-sized ones as prices dropped,” said Frey. “The same is true of robots in warehouses and retail stores.”

Walmart and Target’s strategies are playing out as worker and public concern about automation grows.
According to a 2017 Pew Research survey, 85% of Americans support measures to restrict robots. Andrew Yang, Democratic candidate for president, has made protecting workers against automation a pillar of his campaign.
There are more than 15 million retail workers in America today, and lower-skilled jobs in the industry such as cashiers and clerks are among those vulnerable to technology advances.
Between 6 million to 7.5 million existing retail jobs are at risk of being replaced over the course of the next 10 years by some form of automation, estimated financial services firm Cornerstone Capital Group in a 2017 study.
In the retail industry, “margin pressure has made automation a requirement, not a choice,” according to McKinsey analysts. “Automation will disproportionately disrupt retail.”
Marc Perrone, president of the United Food and Commercial Workers International Union, which represents some workers at Stop & Shop and Giant, said that companies that automate certain tasks are not “‘freeing up’ staff to work with customers.”
“The truth is, they are de-skilling jobs and cutting workers’ hours to make a buck providing less service to customers and chipping away at good jobs for hardworking people,” he said.
Automation is changing the nature of retail work, experts and Walmart leaders say.
Martin Block, executive director of the Retail Analytics Council and professor at Northwestern University, said robots in stores will increase demand for retail workers, “transitioning them to doing different tasks, especially spending more time with customers.”
“As we evolve, there are certain activities, certain jobs that’ll go away, but new jobs will be created,” Walmart US CFO Michael Dastugue said at an analyst conference in March.
Walmart expects to use some of the hours it saves because of the robots to assign workers to newly-created roles, such as selecting customers’ grocery pickup and delivery orders. Walmart has created 50,000 of these new types of jobs over the past three years.
“We’re looking at our jobs through the lens of technology and asking ourselves which human tasks add value — and which should be automated,” CEO Doug McMillon said last year. “The workplace is going to look different in a few years — not just in retail, but across the economy.”
Correction: A previous version of this article misstated the month in which Walmart US CFO Michael Dastugue talked about shifts in Walmart jobs.