The Last Days of the Print Car Magazine 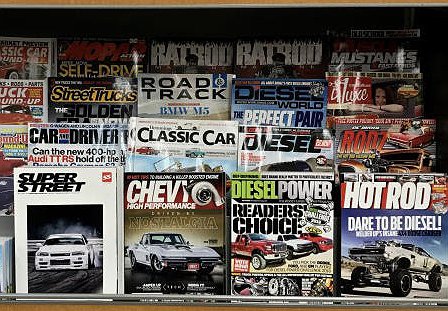 On December 6, TEN Publishing announced that next year it will shut down the print operations of an astounding 19 (out of 22) automotive magazines it owns.

The iconic Automobile magazine, which combines the usual performance car write-ups with some lifestyle considerations and literary flourishes, will no longer be on newsstands. Also among those on their way out are Car Craft, Classic Trucks, Lowrider, Mopar Muscle, Street Rodder, Truck Trend (the SUV and pickup sister to Motor Trend), and Vette. The company said it will continue to offer its discontinued print titles online, but it was unclear if this included all the books.

“We are doubling down on our best-in-class digital product experiences while maintaining support of the three most popular, profitable, and strategic brands across digital and print,” TEN said in a statement. In 2017, TEN chief marketing officer Jonathan Anastas said that its auto brands had a “collective reach” of 123 million, with Automobile in the vanguard. That same year, the publisher tried to “relaunch” Automobile with more coverage of classic cars and a new, upscale format.

In the recent memo to staff, MotorTrend Group president and general manager Alex Wellen wrote, “I know this is difficult news…. Simply put, we need to be where our audience is. Tens of millions of fans visit MotorTrend‘s digital properties every month, with the vast majority of our consumption on mobile, and three out of every four of our visitors favor digital content over print.”

The only MotorTrend Group magazines to remain in print are Motor Trend, Hot Rod, and Four Wheeler. Hot Rod was founded in 1948 and Motor Trend in 1949 — both were Petersen titles then. But longevity doesn’t keep a magazine safe in these troubled times for print. Autoweek was founded in 1958; it recently switched to a twice-monthly print schedule. But that, too, was discontinued in October, when it was announced that the title, minus its print edition, would go to Hearst (which also publishes Road & Track and Car and Driver).

Meanwhile, back in January, Road & Track (founded 1947) decided to close its Ann Arbor, Mich., operations and put its digital editor in charge of the publication. Car and Driver laid off a large number of staffers (approximately 13) last year.

Kim Wolfkill had two stints at Road & Track, most recently from 2016 to 2019 as editor. “While unfortunate, it’s not surprising to see how many print magazines went down,” he says. One reason he cites: The ad agencies that buy space in car magazines have become entranced with digital/social media, influencers, and TV, as well as the quick returns they get in terms of metrics that measure ad performance. “Print is considered old school,” he says. Indeed, I’ve been given this precise response from auto executives.

Wolfkill also pointed out the willingness of many young writers on digital platforms to work for very little money — with free test cars and trips to exotic locations as the payoff. That results in a plethora of automotive titles available free to anyone with a phone. The writing quality may not be high, but the information is there instantly when a new model is announced.

“The demand for long-form storytelling is going down,” Wolfkill says. “The audience doesn’t necessarily care. They just want to go online when the embargo on the car is lifted and get all the technical specifications, and maybe a video of it going around a track.”

Despite their advertising woes, print car magazines still have a lot of readers. Road & Track has about 550,000 to 600,000 subscribers, and Motor Trend and Car and Driver 1.2 million each.

MediaVillage wrote in October that print car magazines seemed starved for advertising, with the notable exception for many titles being the WeatherTech floormat company (whose four-page spreads dwarfed the few car company placements).

“Unfortunately, the economics of print publishing just don’t seem to work anymore — in pretty much every vertical, not just cars — with ad revenue way down and costs up,” says Sam Abuelsamid, principal analyst at Navigant Research. “It’s sad to see some of these long-running titles get shut down.”

And according to Eric Evarts, a former auto reporter at both Consumer Reports and Green Car Reports, “Youth is always the most desirable demographic for marketers because they have their whole consuming lives ahead of them.” But today’s youth are famously disconnected from cars and driving and “can’t support 14 new-car magazines all covering the same new intros and updates every month.”

Twenty-seven percent of 18- to 29-year-olds said in 2017 that they never read a print magazine, according to Statista. The average age of print car magazine readers has been rising — up by seven years at Automobile and Hot Rod in one survey and up by five years at Road & Track. Automobile magazine’s current press kit says its average reader is 37 years old, which is much younger than the average print magazine reader, but the statistic doesn’t say if that includes digital. Wolfkill says that Road & Track‘s average reader is in their 40s.

It appears unlikely that there’s any magical formula that would make a print car magazine work in 2019. Wolfkill thinks there may be room going forward for maybe half a dozen beautifully produced and written auto publications, perhaps issued quarterly. Such magazines, gorgeous to look at and dedicated to classic cars, thrive in Great Britain. “We live in a different age,” he says. “Nothing that has happened has surprised me.”