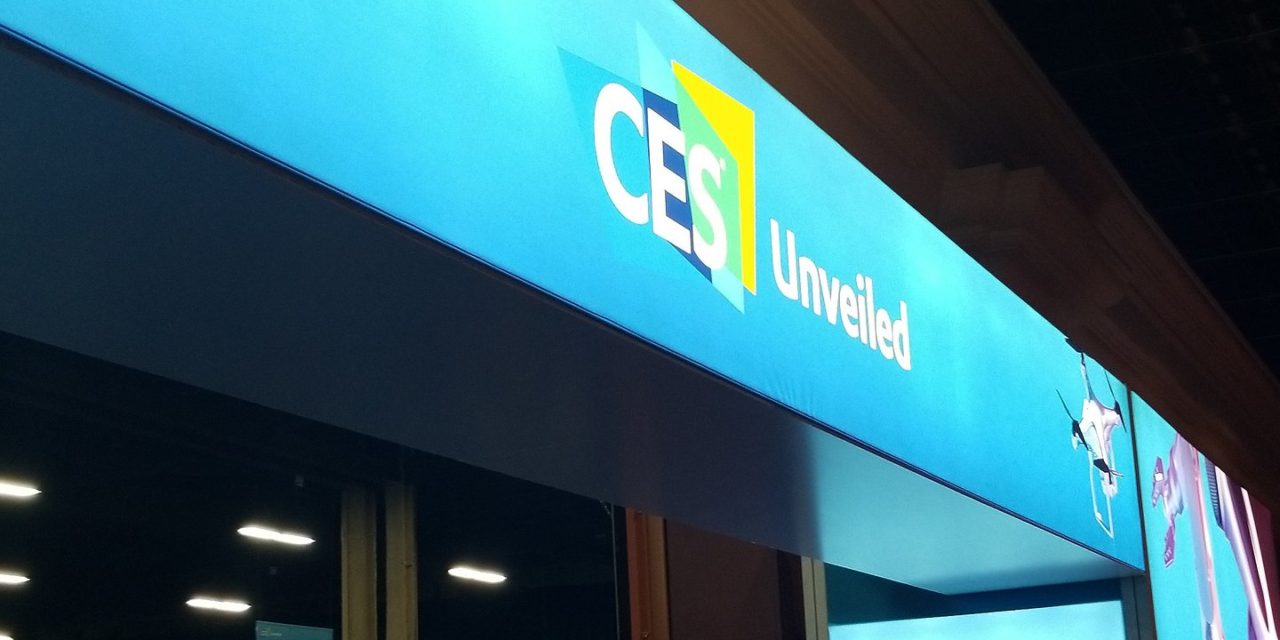 In Part I of my CES summary, I covered some of the major trends that came to my attention, including:

Continuing on, here in Part 2, we’re going to feature:

North Hall traditionally has been the place to see all the new auto tech, but this year there seemed to be car tech everywhere. The biggest aha moment for me was the realization that we are heading into an era where, in the front seat, we will have a long, single-panel digital screen. The driver’s section will have a digital version of a typical dashboard — speed, gas, mileage, diagnostics — and the passenger in front will be able to choose from several entertainment and information options. For passengers in the back seat, separate screens will offer numerous video app options, such as viewing entertainment content and video conferencing.

Sony shocked everyone with its Vision-S electric concept car, which incorporates 33 automotive-grade sensors, including Sony CMOS sensors, eight exterior cameras, and four interior cameras for safety. There are multiple ultrasonic and radar components, in addition to the use of three Solid State Li-Dar units, which enables self-driving cars to communicate with each other and the Internet of Things infrastructure. What caught my eye was the beautiful panoramic screen (as described above). 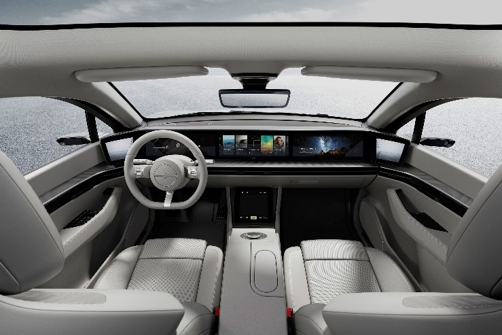 Whether or not this vehicle is ever released, the vision of Sony redefining mobility and “[creating] a car society in which each owner possesses a single vehicle for a long time and minimizes their environmental impact” is a laud-worthy goal.

The Robots Are Here

Walking around South Hall and parts of Central Hall, at times, felt like being in the back-offices at Westworld. Robots are not just “concept” anymore. They are here, not only as vacuum cleaners, but also as educational devices, emotional comfort, elderly companionship, and, yes, “workers” who might replace those with more rote roles.

Watching a robot play ping pong is an amazing experience. Forpheus, from Omron Corporation, has been at CES for the past two years, but I never tire of watching it woop the top players in the world. This year, Forpheus has been equipped with a coaching mode, so it might just take it a bit easier on its opponent in the name of learning.

Last year, everyone was buzzing about BreadBot. This year CES kicked it up a notch with the PizzaBot from Picnic. PizzaBot is able to produce up to 300 pies an hour; however, it was not able to bring down the ridiculous price of food at CES, with each slice from PizzaBot being sold at $7.50. 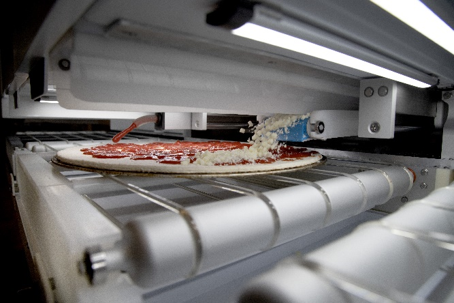 About eight years ago at CES, I had a conversation with a QSR client about the future being restaurants where the only human would be a security guard. You could order and pay through your phone and robots would make your burgers. That day is closer than ever.

In fact, that day is so close, it was the theme of LG’s CLOi robot exhibit. LG showcased an entire mock restaurant run by robots. Robots greet you and take you to your table, and then you input your order on the tabletop robot. The food is cooked and delivered by robot, then CLOi takes your dishes away, washes them, and then will pour you a nice, hot cup of coffee. I want to focus on the fact that the robot washes dishes.

Finally, there’s Ballie, Samsung’s decapitated BB-8. I refer you to my review of the Samsung keynote, but let me just say that, while I felt that there was a total over-emphasis of Ballie, the idea of Ballie as an elder-care product is not outside the realm of reason.

Back to the Future II

Transparent LED and “fan-powered” holograms were the two standouts in out-of-home. Transparent LED, which allows video and graphic images to run on a see-through screen is not new. However, with LG, Sharp, and Skyworth all showing retail window–size versions of the tech, there seems to be a renewed push.

HYPERVSN is a wonderful illusion that creates the essence of a Hologram using LED lights and super large fans. The images it produces can be used to tell stories and are so compelling and spellbinding that I am amazed they haven’t been adopted in more key OOH spaces. When we all marveled at the holographic Jaws 3 shark in Back to the Future II, it seemed so futuristic. With HYPRVSN, the same effect, if not the exact technology, is here today.

If you remember the movie Minority Report, you recall that the digital signage messaging was tailored and personalized to each individual. I’ve always belittled this concept with the thought that too many groups of people pass by an individual sign to make this a viable option. So — and yes, this is a rare admission — thanks to the folks at Misapplied Sciences and a demonstration at CES by Delta Airlines, I could very well be wr-wr-wrong.

This technology is far more complicated than my explanation but suffice it to say that when you scan your boarding pass at TSA, AI is tracking you. By connecting to that AI system, and with Misapplied Science using a technology called Parallel Reality Delta Airlines, it will be able to show you your flight, and only your flight, on the departures and arrivals screens. Which is a good segue into the next key topic of CES 2020.

Despite all the amazing technology — including the clear movement into a 5G, automated, data-centric, robotic world; panels focused on addressable AR, TV, VR, XR; and the true progress made on all of these fronts — there was a giant elephant in the room: privacy.

I think California was mentioned more times than in your average Beach Boys song.

From Samsung’s CEO, Consumer Electronics division, pledging to “never share data with a third party without your prior and direct consent” to a mega and sometimes contentious panel — featuring the chief privacy officers of Apple, Facebook, P&G, and the FTC commissioner, Rebecca Slaughter — the impact of GDPR, CCPA, and the myriad other state privacy laws that could roll out this year were at the center of many direct and side conversations.

While the collective whole continued to voice their desire for a federal privacy law, which remains unlikely until at least 2021, some may have an issue with that, given Commissioner Slaughter’s thoughts during the panel. She said, “As a matter of principle, we understand different types of data are more or less sensitive. Location-based data is particularly sensitive. De-identification is only meaningful if it cannot be re-identified. We don’t have confidence that it’s impossible, [improbable], or even unlikely. Maybe there are tech solutions, but there are also opportunities for innovation on the bad side of data usage.”

From robots to avatars to flying cars to fully automated closets with smart mirrors that not only allow you to see wardrobe options on you in real time, but will also dry clean and fold your clothes, what was clear to me from CES 2020 is that we are closer than ever to the science fiction future that has powered our imaginations for decades. The only thing that bothers me, though, is that I am not sure if we are closer to The Jetsons or Terminator.

But Wait, That’s Not All

So, I know the burning question still stands: What was the coolest thing you saw at CES?

For this list, I’ll try to keep it to finished products, not conceptual ones.

Prinker: I’m not one who will ever get a permanent tattoo, but I do have a daughter who loves temporary tattoos. And, if you are a brand who is running a big event, how great would it be if you could have people lining up to get a temporary brand tattoo to show off to all their friends on Snapchat, Instagram, or Facebook?

The Prinker S (black Ink only), priced at $269, and the Prinker Pro (color ink), priced at $299, is a really cool device that can add a temporary tattoo with one quick swipe. Simply choose a design in the Prinker app on your phone or design your own and upload it. Swipe the Prinker and you’ll have a tattoo that will wash off easily in one day.

Bartesian: Three words: Keurig for cocktails. The Bartesian, which retails for $349, can be your home bartender. Simply fill three of the four containers with your favorite spirits and the fourth with water. Drop in your preferred cocktail container pack (looks like a K-Cup) and let the Bartesian do its thing and mix you a great aperitif. Currently, there is a classic collection pack for $14.99, which includes mixers for a Cosmopolitan, Long Island Iced Tea, Margarita, Old Fashioned, Uptown Rocks, and Whiskey Sour. You can also subscribe to a monthly package for $42.74, which gets you three six-packs each month. 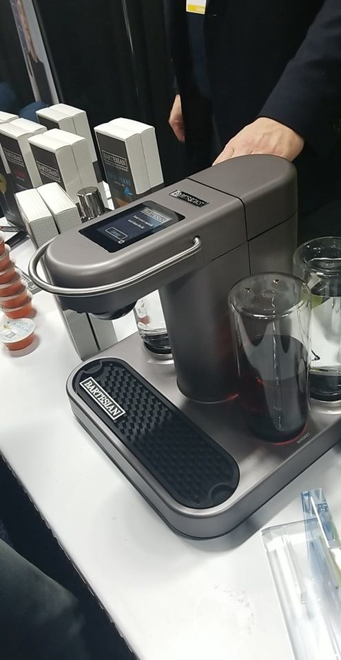 Nreal AR Glasses: Billions of dollars have been invested into Magic Leap, the augmented reality start-up. Although there are some interesting applications being developed, these glasses are clunky and not fashionable in any way. Enter Nreal, where the glasses look no different than a normal pair of sunglasses. You carry a small disc on your belt and, with a 52-degree field of view, the augmented world comes alive. The light version can also be tethered to your smartphone.

Nreal may be available in 2020 for $399. This is the real deal. The AR is natural, and the glasses are comfortable and fashionable. It’s entirely possible that Nreal will “leap” right over Magic Leap to take the leadership in AR. However, there is an ongoing lawsuit that Magic Leap has filed against Nreal.

ThermoReal by Tegway: The success of virtual reality depends on tricking your mind to believe that you are in another place. The greater the experience aligns with your real senses, the more open your mind is to accept the alternate reality. There are several VR accessories out that provide a level of haptic feedback, including the Tesla Bodysuit or bHaptics Tactot vest.

While these accoutrements will give you a jolt, they feel more like buzzes or taps — much different than a true experience. ThermoReal takes it up a notch by using flexible thermoelectric devices (F-TED) technology strapped around arms, wrists, and legs to simulate the sensation of heat, cold, and pain. To demo, I played a snowball fight game wearing the technology. When I was hit by a snowball, I felt it. Not just a buzz, but actual cold. When I went to the virtual campfire to warm up, I had to pull my hands away as it was getting too hot. While this product is still very much beta, it has tremendous promise in adding a big dose of reality into VR.

Jeff Minsky is editor of and lead industry analyst for The Myers Report at MyersBizNet and MediaVillage contributor But Wait,That’s Not All…. Jeff Minsky is a multi-award-winning advertising and digital media pioneer, innovator, strategist and respe… read more