ATSC 3.0 Deployments: Where and When Will NextGen TV be Available? 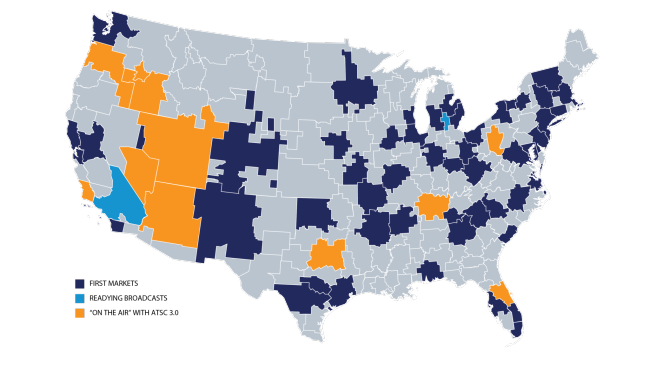 UPDATED 7/2: ATSC 3.0 deployment is well underway in the U.S., as the ATSC has shared that there will be more than 60 “first markets”—including the top 40 markets—that will bring the NextGen TV standard to its viewers in 2020.

With these markets, ATSC says ATSC 3.0 will reach 70% of all viewers in the U.S. To date, six markets are currently “on the air” with ATSC 3.0 and four are readying broadcasts, having FCC permission but are not yet on-air. The others listed are part of the first market group.

ATSC has created a map for NextGen TV deployments in the U.S.

Here is a complete list of the ATSC 3.0 deployment breakdown:

The ATSC offered an official progress report on May 11.

While the markets will be capable of broadcasting these signals, there is still a need for consumer devices to receive them. However, there are efforts by major manufacturers and Kickstarters alike, to make that technology available.

Get notifications from TVTechnology?