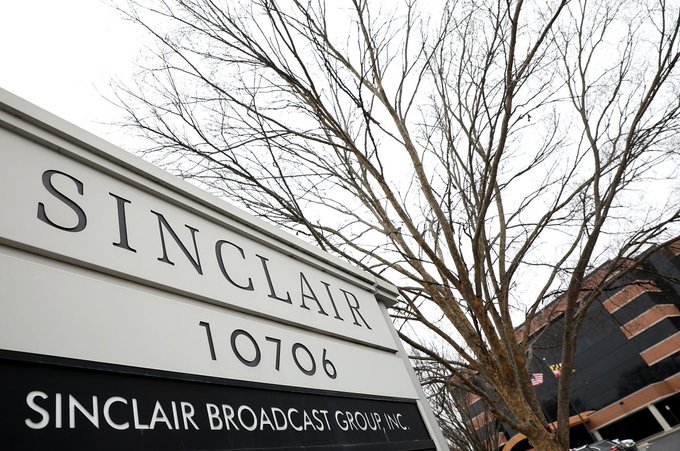 Sinclair Broadcast Group reported a bit third-quarter loss as it took a $4.2 billion writedown on the regional sports networks it acquired last year.

Revenue rose 37% to $1.54 billion, thanks in part to record political ad spending..

The regional sports networks have been a problem for Sinclair, which was reportedly in discussions with lenders to restructure $8 billion of the debt it took on through Diamond Sports Group to buy them from The Walt Disney Co. in August 2019.

Because of the pandemic postponing games, Sinclair said it would have to pay distributors rebates of $128 million in the third quarter, and $371 million this year.

Sinclair will also be getting money back from the teams its RSNs cover because of games not played. CFO Lucy Rutishauser, speaking on the company’s conference call with analysts, noted that the company expects to get more in than it will pay out. “It will probably be about $200 million on a net basis,” she said, adding that doesn’t count the ad dollars the RSN’s lose by not televising games.

The RSN’s helped Sinclair boost its distribution in the quarter to $1 billion, up from $679 million a year ago. But Sinclair said that being dropped by Hulu and YouTube TV cost it about 10% of local gross distribution revenues for the month of September.

In addition to the charge related to the RSNs, the company also took a charge of $13 million for non-recurring costs for transaction, COVID, legal, litigation, and regulatory costs.

“Driven by stronger than expected political and sports advertising revenue, and stringent cost control measures during the pandemic, Sinclair’s results for the quarter, excluding the impairment, exceeded our expectations and guidance,” Chris Ripley said. “While core advertising trends in our Broadcast segment continue to face challenges due to the pandemic, we did see improvement as we moved through the quarter, despite having to balance strong political demand that competed for inventory.”

On the company’s earnings call with analysts, Rob Weisbord, president of broadcast and CRO noted that since the beginning of the pandemic, “every month has picked up, which is encouraging, especially with the record political ad spending crowd out, the core had been able to strengthen.”

Weisboard said that  November appears to be the strongest month for ad revenue since the start of the pandemic, but held off on making a forecast because of the way COVID cases have been spiking.

For the fourth quarter, CFO Rutishauser said Sinclair expects media revenue to be between $942 million and $961 million, up 16% to 19% from last year’s pro-forma $810 million. Adjusted EBITDA for Sinclair’s broadcast and other segment is expected to be between $351 million and $367 million, compared to a pro forma of $%272 million a year ago.

Rutishauser said the increase in media revenue is driven by higher political and distribution revenue. She said that pro-forma core advertising is expected to be down in the mid to high teens.

For local sports, fourth-quarter media revenue is expected to be between $557 million and $563 million, down 29% from last year’s $788 million, she said, adding that the projecting include  $119 million for the distributor rebates, the absence of the two virtual MVPDs and the impact from a later start to the NBA and NHL seasons.

Fourth quarter EBITDA for local sports is expected to be $235 million to $241 million.

Analysts on the company’s earnings call had questions about Sinclair’s commitment to the RSN business.

“We intend on reinventing the RSNs around gamification, around community-based fandom. and around direct to consumer. That’s going to be, we think incredibly exciting and rewarding for Sinclair and that’s where we’re focused,” Ripley said.

Ripley said Sinclair expects to launch a new sports app by the beginning of baseball season. The company is eyeing new revenues from gaming and eventually gambling.

“One of the core reasons we went for this transaction and it’s still true today is that we fundamentally believe that Sports rights will be worth more in the future than they are today, that this is a growth industry. It needs to change and needs to evolve,” Ripley said.

Advertisement
In response to another question, Ripley acknowledged that the the Kansas City Royals had gotten equity in Fox Sports Midwest as part of a new rights deal. He noted that many teams own parts of the Sinclair RSNs.

“Going forward, that is going to be a bigger part of the equation, as we move to a more variablized rights compensation structure,” he said.

Analysts were concerned that Sinclair’s stations were losing retransmission dollars in order to gain carriage for its RSNs. Ripley was asked if with Sinclair’s retransmission deal with Dish coming up, if the company would negotiate for carriage of both the stations and the RSNs, which have been off Dish for months.

“We have been very successful in negotiating package deals for all of our programming wth all the traditional MVPDs, and so I’d expect us to continue that strategy with Dish,” he said.

In addition to its plans to add gaming to its RSNs, Ripley said Sinclair had other initiatives in the works to grow the company, including, the continued roll-out of NextGen TV expected to be available in approximately 45 markets by the end of 2021, and the premier of The National Desk, a new headline news service launching in early 2021.  “We believe these initiatives, our free, over-the-top ad-supported digital platform STIRR, gamification and direct to consumer and legalized sports betting opportunities that the company is exploring, position Sinclair for continued success in the years ahead,” he said.