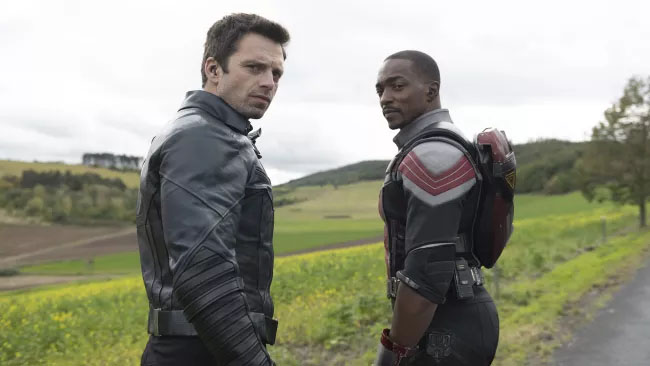 Disney Plus’ first and second episode of The Falcon and the Winter Soldier was the most viewed SVOD original series during the week of March 22-28. According to Nielsen, the first two episodes of the six part series garnered 628 million minutes of U.S. viewing.

The Marvel series debuted on Disney Plus on March 19 and took in an impressive 495 million views per minute in its first three days. The series follows Anthony Mackie and Sebastian Stan who both reprise their Avengers roles for the show. The second episode of the series began streaming on March 26. The Falcon and the Winter Soldier came in No. 3 in Nielsen’s overall ranking chart.

Falcon and Hulu’s Solar Opposites were the only non-Netflix shows to make it onto Nielsen’s originals chart. Nielsen continues to just cover the four biggest SVOD platforms in the U.S.— Netflix, Amazon Prime Video, Hulu and Disney Plus.

Netflix’s eight episode series The Irregulars, which began streaming on March 26 came in No. 2 on Nielsen’s ranking of SVOD original shows and No. 7 on the master chart with 424 million viewing minutes. The series follows a group of troubled street teens who must come together to save London and the entire world.

Netflix’s 10 episodes of Ginny & Georgia, which premiered Feb. 24, fell to No. 3 on Nielsen’s ranking of SVOD original shows and No. 9 on the overall list, collecting 390 million minutes of U.S. viewing. That is down by 150 million viewing minutes week over week.

Taking the No. 4 spot on the originals list and the No. 10 spot on the overall Nielsen chart was Netflix’s new Mexican thriller series Who Killed Sara. The non-English language title stars Manolo Cardona as Alex Guzman, who is determined to find out who killed his sister Sara. The 10-episode series launched on March 24 and drew 363 million minutes of U.S. viewing.

Netflix streaming of the CBS procedural NCIS was not only the most watched show among acquired series, but also the most watched U.S. SVOD show for the week of March 22-28. According to Nielsen, NCIS’s 353 episodes drew 725 million viewing minutes.

The Netflix streaming of another off-network show, CBS procedural Criminal Minds, came in second place among all SVOD shows and second on the acquired list. The 12 seasons and 307 episodes of the procedural drama licensed by Netflix garnered 656 million minutes of viewing.

The off-network run of the ABC medical drama Grey’s Anatomy on Netflix, where 16 seasons and 367 episodes of the series are available, tallied 610 million U.S. viewing minutes during the week of March 22. The show came in No. 3 on the acquired series chart and No. 4 on the master chart.

Coming 2 America, fell to the ninth spot on Nielsen’s movie chart during the week of March 22. The film captured 154 million minutes of viewing minutes.

For the third consecutive week no television program or film broke the one billion viewing minutes mark among the four major U.S. subscription streaming services: Netflix, Amazon Prime Video, Hulu and Disney Plus.