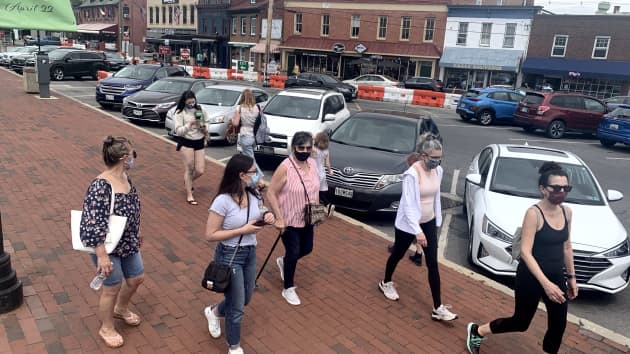 For Mitch Hughes, chief executive of Vizz, a construction management software firm he founded in 1996, the pandemic created ideal conditions for acquisitions.

Vizz, which runs a visualization platform that helps developers create realistic virtual models, didn’t have much presence on the manufacturing side. Manufacton, on the other hand, had software used for modular construction, compatible software, and a “dream team” of people. Yet, as a relatively small, young company, it didn’t have the traction to respond to the sudden increase in demand.

“Covid created a hurdle for them, but it created an opportunity for us,” Hughes said. Early this year, Vizz acquired Manufacton, keeping on all its employees.

While plenty of small businesses owned by baby boomers were hit hard by the pandemic, there is also a large cohort of boomer businesses that have used the pandemic, and record low interest rates, as an opportunity to expand.

According to a New York Fed and AARP study, older business owners age 45 and up entered the pandemic with more of a financial cushion than their younger counterparts. That cushion is more important than ever when the world turns upside down. According to a survey by BizBuySell, an online business for sale marketplace, 30% of buyers are baby boomers.

A pandemic may seem like a strange time for a booming M&A market. Many small businesses have suffered, and many failed. Data shows government assistance did not flow through the system in an equitable way, either. Meanwhile, the latest CNBC|SurveyMonkey Small Business Survey for Q2 2021 showed that many entrepreneurs expect better business conditions and increased revenue despite a net negative confidence reading overall and widespread fears about a tight labor market and rising cost of goods.

But some business and investment experts say business owners run a big risk of not being bullish enough after the pandemic. Brokers noted that low interest rates, PPP loans, and other government assistance have all helped fuel acquisitions for entrepreneurs able to take advantage of conditions.

“They’re seeing a way they could buy a business and get a really great loan. There’s just a ton of opportunity. A lot of credit,” said Andrew Cagnetta, chief executive of Transworld Business Advisors in West Palm Beach, Florida.

Prices have risen dramatically as a result of the bullish business buying. According to the NFIB Small Business Optimism Index, the net percent of owners raising average selling prices increased 10 points to 36%. That’s the highest reading since April 1981 when it was 43%. In its quarterly report, BizBuySell said the median sales price was $350,000 in the first quarter, a 30% jump from a year ago.

“It’s gonna sound crazy, but last year was my best year ever,” said Sheila Spangler of Murphy Business Sales in Boise, Idaho, who focuses mainly on businesses valued less than $2 million. She adds that this year is also “super busy.”

I’ve run businesses for other people for most of my career. I always felt like if I can run a business for them, I’m pretty sure I can run a very successful business of my own.
Kevin Glass, new franchise owner of Pinch a Penny Pool Patio Spa

Buyers typically outnumber sellers, but the pandemic has exacerbated this. Cagnetta said he’s seen growth in a few categories of buyers. There’s private equity and SPAC (special purpose acquisition corporation) buyers. Then there are business owners who are already doing well and looking to expand. Another emerging group is boomer buyers who were formerly corporate employees. The pandemic forced many to rethink their lives – either because of layoffs or rethinking priorities. The same trend occurred after the Great Recession a decade ago when there was a “wave of dislocation,” said Bob House, president at BizBuySell. “People do turn to business ownership as a way to earn a living, as just a kind of a resetting,” House said.

Kevin Glass became a franchise owner of Pinch a Penny Pool Patio Spa in Conroe, Texas, after being furloughed at the start of the pandemic. With 35 years in the oil and gas industry under his belt, Glass had already been thinking about the next chapter of his career. He knew he was in a vulnerable position even before the pandemic, and had been exploring options. Once he was furloughed, that search kicked into high gear.

Glass says he got a retirement package when he was laid off, but would not have been able continue to live his current lifestyle on it. He used the retirement package to fund the business acquisition. Glass looked into franchises specifically because of the support of an established business model. He also considered the resale value. Pinch a Penny’s fixed interest financing program further sweetened the deal.

“I’ve run businesses for other people for most of my career. I always felt like if I can run a business for them, I’m pretty sure I can run a very successful business of my own,” Glass said.

Business sectors where deals are booming

While the number of transactions has yet to reach pre-pandemic levels, it’s starting to pick up, especially for businesses that performed well throughout the pandemic, such as liquor stores, home improvement businesses, e-commerce sites, medical businesses, manufacturers, and distributors. Still, brokers say the anticipated generational wealth transfer with boomers selling their businesses has yet to occur.

It is not necessarily the children of boomer owners who are buying. Boomers entrepreneurs might usually pass their businesses on to their kids, but some are finding that their children don’t want the business. Boomers make up 41% of small business or franchise owners, second to Gen X at 44%, according to a survey by Guidant and the Small Business Alliance.

“The seller tsunami has not happened yet,” Cagnetta said. “Business was very good until the pandemic hit, then everyone’s been in a holding pattern. But I do think they’re coming out to sell now,” he added.

One major factor brokers pointed to is an anticipated tax increase. Biden’s tax proposals would increase taxes on capital gains exceeding $1 million. The plan calls for an exemption for small businesses as long as they remain family-owned and operated. While it’s too early to say how the plan will work out or if it will go through, brokers say it’s putting pressure on business owners to sell.